Ask DWM: What is an Inverted Yield Curve and What Does it Mean to Me? 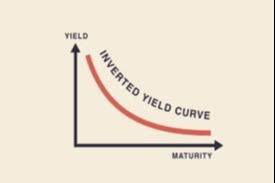 Great question.  Today, long-term bond rates are well below short-term rates.  This is not “normal” and therefore is called an “inverted yield curve.”  This condition provides important information about inflation, future Fed cuts and expected economic growth- all of which are very important to investors. Let’s start with the basics.

A yield curve is a graph showing interest rates paid by bonds.  The chart is set up with the horizontal axis representing the borrowing period/maturity (or “time”) and the vertical axis representing the interest payments (or “yield”).    We all would typically expect that loans over a longer period time would have a higher interest rate or yield.  That’s “normal.”   For example, if a 30-year mortgage rate is 4%, a 15-year mortgage rate might be at 3.25%.    A one-year Certificate of Deposit might earn 1% or less and a 5-year CD might be 2%.  The situation is referred to as a “normal” or “positive” yield curve in that interest rates are higher as the borrowing period gets longer and the curve slopes upward. See below: 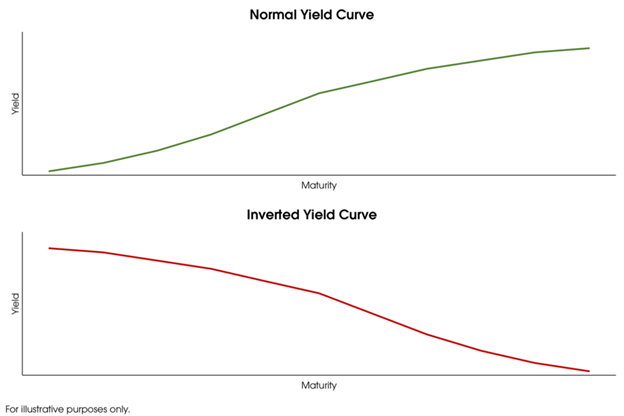 However, rates don’t always work that way.  On Wednesday, the yield on a 1-year Treasuries was 4.8%, higher than the yield (3.8%) for 10-year treasuries.  This situation technically produces an inverted yield curve, since a shorter period had a higher rate.  Even 30-year treasuries are now at 3.9%.

Inverted yield curves are unusual because they indicate lenders (or investors) are willing to earn less interest on longer loans.  This is most likely to happen when the economy is perceived to be slowing down and faces a meaningful risk of recession.  Historically, curve inversions have occurred about a year before each of the past seven recessions in the last five decades, though a recession doesn’t necessarily occur every time we see a yield curve inversion.

The U.S. economy as measured by the “real” GDP (Increase in the Gross Domestic Product less inflation) has already slipped from the real GDP of 2021, which was 5.7%.   Q122 was down about 1%, Q222 was down .6% and Q322 was up 2.9%.  Of course, the Fed has been raising rates throughout 2022 and economists, knowing that there is a lag between interest rate raises and reduced economic growth, expect smaller or negative GDP in the next few quarters.

However, other factors point to strong economic growth.  Unemployment is still low.  Billions in infrastructure programs are set to start in 2023.   An inverse yield curve typically shows that inflation is waning and a return to a more normal economy is likely.  At the same time, the war in Ukraine continues and there is much unrest in the world, such as the protests currently in China.

So, the current inverted yield curve may or may not be the bellwether of a coming recession.  It does show that inflation is expected to wane and that economic growth is expected to slow in the long run.  This is exactly what the Fed hopes to produce, and it seems to be working.

The Fed has their next meeting 12/13 and 12/14.  Expectation is that there will be an increase in rates of roughly .5% at that time, with additional rate increases in early 2023.  The inverted yield curve indicates that Fed policy has been accomplishing their current goals- reduce inflation and slow down economic growth.  Hopefully, by mid to late 2023, the Fed will be able to shift to promoting economic growth without too much more worry about inflation.

We’ll continue to keep you posted. In the meantime, stay fully invested in your appropriate, diversified asset allocation.  If you have any questions, please give us a call.