Biden’s Tax Plan - Are you Ready?

We’ve all heard that President Biden is looking to raise taxes. No surprise.  The U.S. budget deficit grew to a record $1.7 trillion in the first half of the fiscal year, as a third round of stimulus payments sent federal spending soaring last month.  In addition, Congress is reviewing plans for infrastructure that might reach $2.3 trillion.  The administration has signaled increased taxes in three key areas- corporate, estate and individual income taxes.  The focus of “The Made in America Tax Plan” is on corporate taxes, which we will review today.

Corporate taxes have declined significantly in the last 50 years.  In the 1950s, 60s and 70s many corporations paid about half their profits to the federal government. This money helped fund the government in general as well as special projects, such as the interstate highway system.  Since the 70s, politicians from both parties have supported cuts in the corporate tax rates, under intense lobbying pressure from corporate America. At the same time, global corporate tax rates, have become a “race to the bottom” in which countries have been seeking to attract the largest multinational companies with ever decreasing tax rates. As a result, corporate tax receipts as a percentage of GDP are the lowest since WW II.  And, last year, 55 of the largest U.S. corporations paid no tax at all.  Today U.S. corporations are paying about 10% of federal tax revenue and workers and individuals are paying over 80%. Please see the chart below: 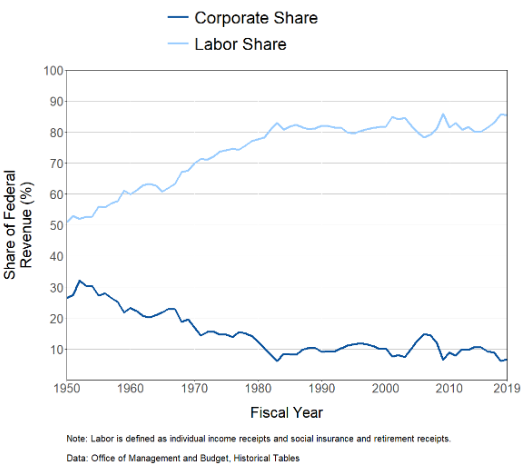 Biden’s Corporate (“Made in America”) Tax Plan is “aimed at addressing the major flaws in the corporate tax code; making the tax code more efficient, reversing biases against labor, raising sufficient revenues to pay for critical initiatives, eliminating incentives for profit-shifting and offshoring, and increasing IRS enforcement.”  Here are the key components:

The IRS is down 17,000 in enforcement personnel in the last decade.  The percentage of individuals audited is the lowest in 40 years. Furthermore, the commissioner said the agency is often “outgunned by corporations and high-income earners.”  There are only 6,500 frontline revenue agents who handle the most complex, sophisticated individual and corporate matters.  Furthermore, cryptocurrencies and foreign-source income can make collections even tougher in the future.

The IRS has estimated that increasing enforcement dollars would bring higher IRS revenues at the rate of $5 to $7 for every $1 in new hires.   Accordingly, the Biden budget includes a 10% increase in spending on the IRS.

Though some of these tax changes can be done administratively, most have to be approved by Congress.   However, it is reasonable to plan on the likelihood that taxes on the wealthiest Americans will be increased.

In addition, to corporate taxes, both individual income taxes and estate taxes could be changed as of 1/1/22.  Income taxes are expected to increase for those making above $400,000 (not sure if that will be per person or per family).  Social security payroll taxes, currently capped at max of $142,800 of payroll, could be charged on higher payrolls, in order to keep social security solvent.  The estate tax exemption, currently $11.7 million per person could be reduced to $5 million or even lower.  In addition, the overall step-up in basis as of the date of death, could be reduced or eliminated as well.

As the tax changes become clearer, we’ll be back to you with further blogs including outlining the significant changes and the strategies and opportunities that may be helpful in dealing with them.  As you know, tax minimization is one of our DWM goals and passions in adding value to our clients.