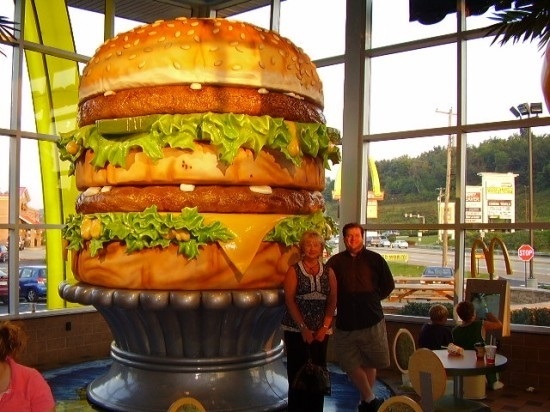 The Big Mac Index was started in 1986 to provide a guide as to whether currencies are at their “correct level.”  It is based on the theory of Purchasing Power Parity (PPP) which holds that in the long run exchange rates should move towards equalization of an identical basket of goods and services.  Therefore, the Big Mac “raw” Index would suggest that the Chinese yuan was undervalued 43% to the dollar currently and will likely rise in the future.

However, the rise will likely be much less than 43%.  This is because you would expect that a burger would be cheaper in poorer countries than in rich ones because labor costs are less.  Hence, the Economist also compares the Big Mac price to GDP per person to get an adjusted index.  When we use the adjusted index, the yuan is calculated to be 9% undervalued.  India is estimated to be 34% undervalued and Switzerland 13% overvalued using the adjusted index.

The stronger U.S. dollar (USD) is very apparent in the raw and adjusted Big Mac Index.  Over the last 12 months, the WSJ Dollar Index has risen 22%, mostly in anticipation of an interest rate increase by the Fed.    The dollar’s gains are a burden for commodities, which are priced in USD and become more expensive for overseas buyers when the dollar gains in value.  Gold and sugar are two commodities that have been dramatically impacted by the strong USD.

Gold hit a 5 year low last week propelled by a stronger USD, improving economic conditions, investor sentiment, and expectations the Fed will raise rates.  Gold does well in response to unexpected crises (such as the financial crisis in 2008/2009), but not so for long-simmering troubles like the Greece situation.  Furthermore, stocks, as measured by a world index, have gone sideways for 12 months, up less than 1%.   And, with interest rates expected to rise and gold not paying any interest or dividends, investors have been moving out of gold.   Furthermore, China and its citizens who have been big buyers of gold have tapered off their purchases.  First, investors wanted to get into the roaring Chinese stock market instead and then, when it slid, there was little liquidity to buy gold.

Of course, we think of gold as a kind of insurance policy.  There’s a cost when things are good (markets are moving up) or moving sideways because gold is holding or losing value.    But, when a crisis develops then this insurance helps mitigate the damage. A few percentage points of gold in your portfolio helps.  Gold was up 2% in 2008 when stocks were down 35% or more.

In a similar way, sugar fell to a six year low last week.  In the past year, sugar prices have fallen by 25%.  Brazil has been supplying one quarter of the world’s 180 tons of sugar annually.  The value of the Brazilian real has fallen 17% against the USD this year.  As the value of the currency falls, it encourages producers and exporters to sell supplies on global markets, because it becomes more profitable for them when they convert the USD sales back into local currency.

Last week, Brazil’s cane growers announced they are in for an unusually large crop, increasing the worldwide supply.  In addition, artificial sweetener production, including China’s Sucralose is expanding rapidly.  As alternatives to natural sugar flood the global market, prices for real sugar declines.

I always look forward to the Big Mac Index.  It is both fun and educational.  The Big Mac Index has become a global standard, included in several economic textbooks and the subject of at least 20 academic studies.  It helps explain, in part, why gold and sugar hit 5 and 6 year lows last week.  And the Big Mac Index lesson is much more easily digested than many of the economics lectures and papers many of us have had to endure.  Here’s to McD’s, In n’ Out Burger, Five Guys, Shake Shack and more. Keep ‘em coming.