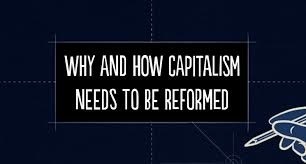 Ray Dalio is the founder of Bridgewater Associates, one of the world’s largest hedge funds. Bloomberg ranked him as the world’s 79 wealthiest person earlier this year. Like many of us, Mr. Dalio was “fortunate enough to be raised in a middle-class family by parents who took good care of me, to go to good public schools, and to come into a job market that offered me equal opportunity.” He has lived the American Dream. America created the first truly middle-class society; now, a middle class life is increasingly out of reach for many of its citizens.

Mr. Dalio “became a capitalist at age 12, using earnings from part-time employment to start an investing career.” Mr. Dalio has been a macro global investor (making predictions on large-scale world events) for 50 years, which required him to gain a practical understanding of how economies and markets work. (In 2007, Bridgewater predicted the coming global financial crisis that hit in 2008-09). Mr. Dalio has learned that capitalism can be an effective motivator to make money, save it, and invest it, rewarding people for their productive activities that produce a profit. “Being productive leads people to make money which provides capital resources, which when combined with ideas can convert them into the profits and productivities that raise our living standards.” Even communist countries, including “communist China” have made capitalism an integral part of their systems.

As part of his work, Mr. Dalio has studied what makes countries succeed and fail. In short, “poor education, poor culture (that impedes people from operating effectively together), poor infrastructure and too much debt cause bad economic results.” The best results come from more equal opportunity in education and work, good family upbringing, civilized behavior, and free and well-regulated markets.

So, how is the US doing?

“Capitalism Is Not Working Well for Most Americans” says Ray Dalio. His research looked at the differences between the haves and have-nots in American- those in the top 40% and those in the bottom 60% of income earners. He found the following key stats:

These gaps weaken us economically because:

In conclusion, Mr. Dalio suggests capitalism is now producing a self-reinforcing feedback loop that widens the income/wealth/opportunity gap to the point that capitalism and the American Dream are in jeopardy. Ray Dalio believes what is needed is a long-term investment program for America that achieves good “double bottom line” returns on investments; producing both good economic returns and good social returns.

The nice bump in economic growth brought on by tax reform has already started to fade. GDP growth is expected to be less than 2% next year. While capitalism has likely worked very well for most of us, who are in the top 40%, it hasn’t worked so well for the bottom 60%. Let’s hope our politicians, of both parties, focus on long-term investments for our country with double bottom line returns. That could really make a difference in long-term economic growth.