Breaking News - How the SECURE Act Will Impact Retirement Plans 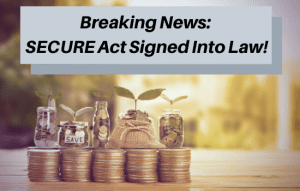 Happy New Year!! We hope everyone had a great holiday. Everyone at DWM certainly did. In late December, Congress’s year-end spending package was signed into law and it included the SECURE Act which has made some significant changes to retirement plans. It’s a mixed bag. Major items impacted are 1) “stretching rules” for IRAs, including Roth IRAs, inherited by non-spouse beneficiaries 2) age limits for IRA contributions and 3) Required Beginning Date (“RBD”) for Required Minimum Distributions (“RMD”) for retirees.

In the past, owners of IRAs and Roth IRAs could leave them to much younger heirs, including grandchildren, who could “stretch” the IRA by taking out the minimum distribution, typically until they were 85 years. This was particularly valuable for Roth IRAs, where the income tax had already been paid and the account continued to grow tax-free for 50 years or more. For example, a grandchild who received a $100,000 Roth IRA from her deceased grandparent at age 30, who invested the money and earned 6% annually and withdrew only the required amount each year, could eventually receive $741,000 in distributions over 55 years, all tax-free. The same applied to IRAs, except there would be taxes to be paid on the distributions each year. This was a great wealth succession strategy.

Now, the “Big Stretch” is gone. The distribution period has been reduced generally to 10 years for non-spouse beneficiaries. Surviving spouses are still covered by the old rules. However, a non-spouse IRA or Roth IRA heir can postpone any distributions until the end of the 10 years to maximize tax-free or tax-deferred growth. A surviving spouse who inherits a Roth IRA can put the account in his or her name, not take any distributions in their lifetime and then leave the accounts to younger heirs who get a 10 year stretch.

The Big Stretch is gone but Roth conversions can still make lots of sense, in the right circumstances. Here’s a real life example of a program we are just putting into place with clients. A Roth conversion is where you voluntarily move all or a portion of an IRA to a Roth account and pay income tax on the amount transferred. The Roth account is tax-free thereafter. Over a 10 year period one of our client couples is converting $1 million of traditional “pre-tax” IRA money to Roth. We do an installment Roth conversion each year, with larger amounts in the beginning. At the end of the conversion, using a 6% annual investment growth, their Roth accounts total $2 million.  It has cost about $250,000 of federal tax (they live in a state with no income tax) to do the conversion. At that point, our clients are 70 years old. They have no RMD requirements on their Roth accounts and, assuming the second to die of the couple passes away at 95 years of age, the $2 million would have grown to $8.5 million over those 25 years. After that, the beneficiaries can allow the money to grow for 10 more years under the new rules and then take tax-free distributions on the roughly $15 million of Roth money. The effective tax rate on the conversion and growth was less than 2% tax ($1 million of IRA money eventually became $15 million of Roth money). Conversions don’t work for everyone but for the right situation, it is a key part of the legacy and wealth succession strategy, even without the Big Stretch.

Lastly, starting dates, or RBDs, have been revised from 70 ½ to age 72 for RMDs. Obviously, people are living longer and many would prefer to start their RMDs later. Again, traditional IRAs have RMDs so that the IRS can finally start collecting tax on the money. The initial withdrawal rate is 3.6% and the withdrawal rate increases each year to 16% at age 100, for example. Roth IRAs have no RMDs for owners and their spouses. Now, if the owner reaches 70 ½ after 12/31/19, the first RMD year is the year in which the owner reaches 72. The RBD is April 1 of the year that follows the year in which the owner reaches 72 ½. Here’s an example, IRA owner was born in April, 1950. She will be 70 ½ in October, 2020 (after 12/31/19). So, she can take his first RMD either in 2022 or by April, 2023 (under the old rules she would have had a RBD of 2020 or April 2021.) However, if the first RMD is taken in April 2023, then the 2023 RMD for her will be taken that year as well. Doubling up may not be advantageous, as it may push you into a higher tax bracket.

Those are the key issues in the SECURE ACT. If you have any questions, please let us know. We love working with retirement plans, traditional IRAs and particularly Roth IRAs. Even with the new changes in the SECURE Act, there are still some great planning opportunities available.