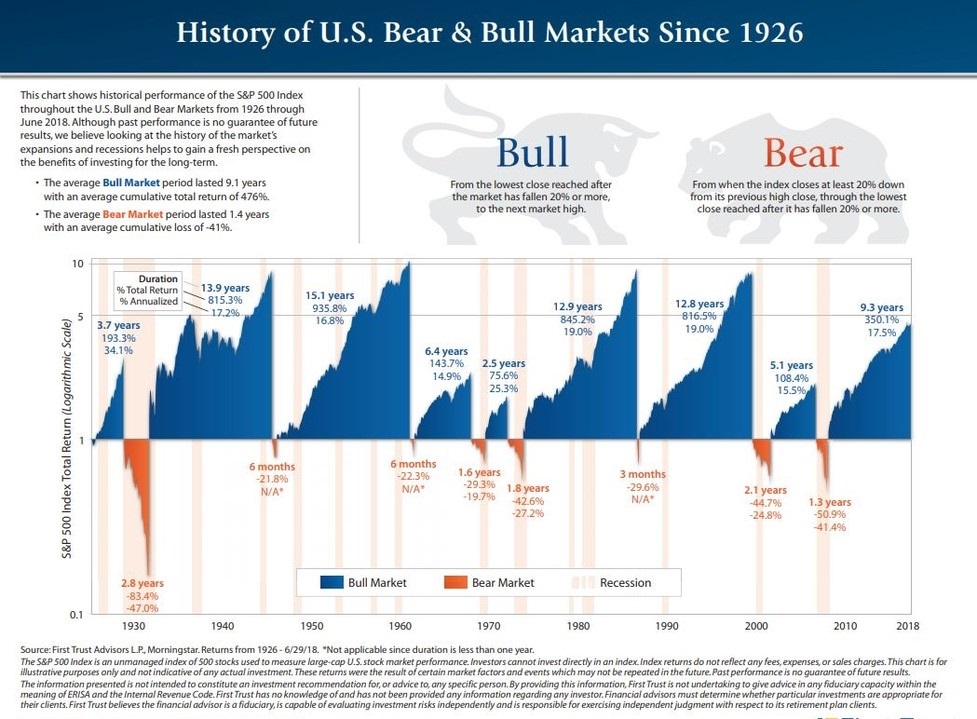 Let me help you with the details of the above chart- though it is difficult to read, it’s quite important.  This graph from First Trust reflects the historical performance of the S&P 500 index from 1926 through June 2018. The blue represents bull markets; the red bear markets. It’s obvious that there is a lot more blue on this chart than red. That’s why we encourage you to “stay invested” through the ups and downs of the markets in a risk appropriate, diversified portfolio.

At DWM, we are asked the question: “How long can this bull market continue?” This question seems to be based on a concern that a bull market comes with a pre-ordained expiration date; when it runs out of whatever made it go. However, selling equities because a bull market run is longer than average has been a great way to miss out on lots of gains. Remember, bull market runs come in all lengths.

While a bull market may be technically defined as a period of time after a 20% drop (bear market) has reached its end, it’s probably healthier to view a bull market from an economic perspective. Barry Ritholtz in a Friday Bloomberg article defined a bull market as follows: “An extended period of time, typically lasting 10-20 years, driven by broad economic shifts that create an environment conducive to increasing corporate revenue and earnings. Its most dominant feature is the increasing willingness of investors to pay more and more for a dollar of earnings.” This is exactly what we have seen in periods after WWII, the 1980 and 1990s biotech boom and now the maturation of internet, software and mobile companies.

Bear markets are typically brought about by recessions; often when the markets have gotten overheated (such as the dot.com bubble bust in 2000). Bear markets can also be brought on by a financial crisis, as we had in 2008-2009. Recoveries from financial crises are quite different from recoveries from depressions.  A post crisis recovery is marked by slow and erratic economic growth, weak wage gains and disappointing retail sales. Furthermore, investors, after being burned, remain skittish for years. The 2008-2009 crisis scarred consumers and left them more determined to sock away funds.

Case in point, the Wall Street Journal reported Monday morning that the personal savings rate is up to 7.2% from the 3.3% estimated previously. The new number exceeds the 6.4% average savings rate since 1990 and is almost three time the savings rate in 2005. The “wealth effect” that we saw in the mid 2000s that increased spending and dropped savings rates, is not happening now. This news, along with the reduction in corporate taxes, historically low unemployment and continued increased corporate earnings bodes well for a continuation of the current Bull Market despite ongoing negative factors.

Yes, we don’t know how long this bull market will run. And, we’re not going to try to time it. We do know, at some point, this bull market run will come to its natural end. Before it does, we may see more pullbacks (declines of 5% or more) or corrections (declines of 10% or more).  Remember this graph- lots more blue than red- and stay invested.