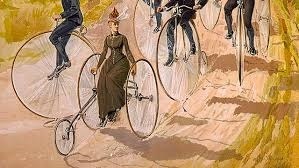 COVID-19 has sparked a huge demand in bicycle sales.  Demand is coming from fitness junkies whose gym is closed, commuters fearful of public transportation, and families going stir crazy inside their homes during the coronavirus pandemic. Bike aisles at Walmart and Target are empty and independent shops, with sufficient supply, are doing a brisk business-selling out of affordable family bikes.  There’s a run on bikes- just like toilet paper a few months ago.

The trend is mirrored around the globe as cities better known for streets clogged with cars, like Manila and Rome, have installed  bike lanes to accommodate the surging interest in cycling while public transportation remains little used.  The demand for bikes in the Philippines is stronger than at Christmas. Italy is providing incentives of up to $575 or 60% of the cost of a new bike.

Shortages are worldwide, especially in the US which relies on China for about 90% of its bikes.  Chinese production was shut down during the coronavirus and it’s just now starting to ramp up again.  For example, the Stemples Cycle Center in Elmhurst, IL (near Chicago) usually has 125 bikes on the floor. Now they are lucky to keep 4-5 bikes in inventory. Furthermore, because the parts also come from Asia, many bike repairs can’t be made.

Interestingly, about 125 years ago, bikes were also in tremendous demand.  The National Geographic recently had a really good article on the origin of bikes and how they transformed the world and spawned both the automobile and airplane industries.

In the late 19 century, bicycles transformed society the world over. It was a technology similar to the smartphone today- everyone wanted one.  In the 1890s, the bicycle was the ultimate “must have”: swift, affordable, stylish transportation that could whisk you anywhere you would care to go anytime for free.

Almost anyone could learn to ride and almost everyone did. Sultans, czars and amirs bought bikes for themselves and their court. However, it was the middle and working classes around the globe that truly made the bicycle their own. For the first time in history, the masses were able to come and go as they please. No more need for expensive horses and garages. The “people’s nag,” as the bicycle was known, was not just lightweight, affordable and easy to maintain, it was also the fastest thing on the roads.

Society was transformed. Women were especially enthusiastic- able to discard their Victorian skirts, adopt bloomers and other “rational” clothes and take to the roads. Susan B Anthony said, “I think bicycles have done more to emancipate women than anything else in the world.”

By 1898 cycling had become such a popular activity in the US that it was said to cost restaurants and theaters more than $100 million a year in lost business. Bicycle manufacturing became one of America’s biggest and most innovative industries. A third of all patent applications were bicycle related.

Englishman John Camp Starley is generally credited with inventing the modern bicycle. When it was first displayed in a bicycle show in 1886, Starley‘s invention was regarded as a curiosity. But two years later when it was embellished with newly invented pneumatic tires, which not only cushioned the ride but also made the new bicycle about 30% faster, the result was magic.

Manufacturers around the world jumped to the meet the demand. In 1895, 200 bicycle makers exhibited 3,000 models at the Stanley bicycle show in London.  One of the largest manufacturers was Columbia bicycles in Hartford, Connecticut. They could turn out a bicycle a minute thanks to an automated assembly line – a pioneering technology that would soon become the backbone of the automobile industry. As a cutting-edge employer in a booming industry, Columbia also provided its employees with bicycle parking, private lockers, subsidized meals and a library.

Bicycles touched virtually every aspect of life – art, music, literature, and fashion.  English songwriter Harry Dacre scored a huge hit on both sides of the Atlantic in 1892 with “Daisy Bell” and it’s “bicycle built for two.”  Writer HG Wells, known for The Time Machine and War of the Worlds and an avid cyclist and shrewd social observer, wrote several cycling novels.  These predicted “cleaner, greener commerce in cities with happier, healthier, more outward-looking residents.”  At a minimum, the millions of bike riders lead to rapid improvements in city streets and country roads and “paved” the way for the age of the automobile.

By 1900, bike mechanics on both sides of the Atlantic had developed spoke tension wheels, chain drives and ball bearings, which could be combined with motors to make a really fast vehicle – not as quiet as a bicycle but fun to drive. In Dayton Ohio two bicycle mechanic brothers, Wilbur and Orville Wright started exploring the idea of heavier-than-air flying machines, strapping wings to bicycles to test aerodynamic possibilities- funding the research with profits from their bike shop.

Back in northern England in the town of Coventry, James Starley, whose bike started it all in the 1880s, died suddenly in 1901 at the age of 46. By then his company had moved on from the humble bicycle to produce motorcycles and eventually automobiles. It seemed the way of the future. In America, another former bicycle mechanic, named Henry Ford, was just getting started when he designed, built and raced a 26 horsepower automobile in October 1901. The Henry Ford (Automobile) Company was founded the next month.

It’s super that bikes are back in great demand again-125 years after their invention.  Wonder if smartphones will have a great surge in demand in 100 years and what new industries smartphones might spawn in the near future.