Climate Capitalists to the Rescue? 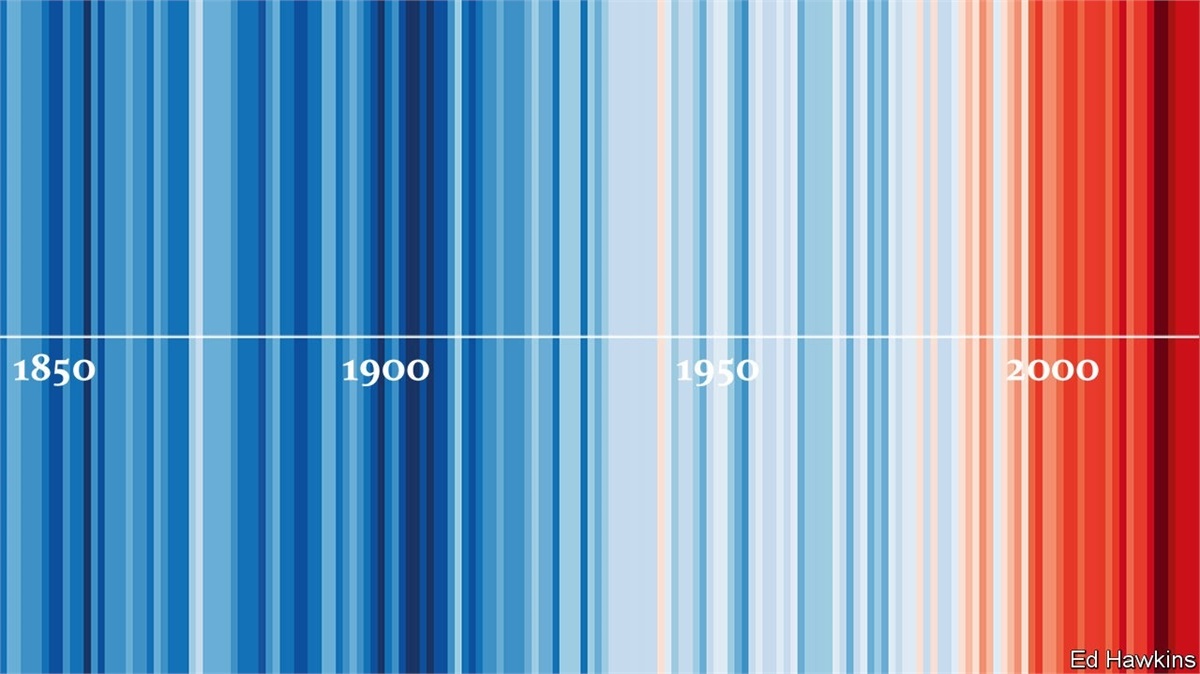 Record heat has hit the South. On October 1, it was 101 in Montgomery, AL. Record highs were hit in AL, TN, MS and KY. An acute lack of rainfall has dried out the Southeast as well and residents and farmers are hurting. Planet Earth continues to get warmer.

Look at the chart above showing the changes in temperatures from the 1850s until now. Each stripe is one year. Dark blue years are cooler and red stripes are warmer. The period 1971-2000 is the base line. At the same time, extreme events like Dorian are becoming more severe, more glaciers have died and seas and lakes are getting higher. The climate has changed.

The past century has seen major changes in the world. The Industrial Revolution has brought riches to some, higher standards of living to many, and the population has increased from 2 billion to 7 billion in that last century, and carbon dioxide (“CO2”) emissions have skyrocketed. Fossil fuels have been used to produce industrial power, electricity, transportation, heating, fertilizers and plastic. In 1900 about 2 billion tons of CO2 went airborne. For 2019, 40 billion tons per year will be emitted, with the biggest increase in the last 30 years.  Expanding use of fossil fuel and related increasing emissions of CO2 have gone hand in hand with the expansion of world growth. See the chart below.

We humans also produce CO2, breathing and eating. Trees and plants absorb CO2 and, with sunlight and water, convert it to food.  Compared to 1900, we have 5 billion more humans, expanded use of fossil fuels and, because of deforestation, we have less flora to absorb the CO2.

The first half of the 20th century scientists believed that almost all of the CO2 given off by industry and humans and not absorbed by plants would be sucked up by the oceans. By 1965 oceanographers realized that the seas couldn’t keep with the CO2 emissions.  Climate change shouldn’t come as a surprise; we’ve known about it for decades.

There are lots of predictions about the impact of climate change in the future. No one can predict the future. But certainly, as our beloved Yogi Berra always said, “The Future is not what it used to be.”

The Economist recaps it this way: “Climate change is not the end of the world.” Humankind is not poised teetering on the edge of extinction. The planet is not in peril.” However, climate change could be a dire threat to the displacement of tens of millions of people, it will likely dry up wells and water mains, increase flooding as well as producing higher temps and more severe weather. The Economist concludes that “the longer humanity takes to curb emissions, the greater the dangers and sparser the benefits-and the larger the risk of some truly catastrophic surprises.”

Addressing climate change will also provide substantial business opportunities in the coming years. Already some countries are abandoning coal to generate electricity. Britain, e.g., has developed a thriving offshore wind farm industry used to generate power. Germany recently announced that it will spend $75 billion to meet its 2030 goals to combat climate change, primarily in the transportation area with electric vehicles.

The UN’s one day climate summit last week concluded with a number of new announcements. 65 countries and the EU have committed to reach net-zero carbon by 2050.  Unfortunately 75% of the emissions come from 12 countries and 4 of them, India, American, China and Russia made no commitment. However, certain businesses such as Nestle, Salesforce and have made commitments to reach net-zero by 2050 or before.

2050 will be here before we know it. Yet, technological change can be adopted quickly, particularly when people are provided a better alternative. In America, the shift from horse-drawn carts to engine-driven vehicles took place within a decade, from 1903 to 1913. Let’s hope climate capitalists all over the world do well for themselves and good for planet as soon as possible and we humans and our countries do our parts as well.