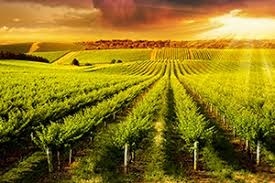 How about a wonderful bottle of Pinot Noir from British Columbia?  How about a baguette made with wheat grown in Siberia? Perhaps a marvelous bottle of champagne from the UK?  Or some avocados and mangos, typically grown in the tropics, from Italy?

Climate change is shifting where crops are grown. Farmers and agricultural businesses around the world are adapting to warmer temperatures.  For some, the heat is threatening the cultivation of certain crops. For others, it’s providing an opportunity for new crops that can now be produced profitably.

Temperatures hit 113 degrees Fahrenheit (“F”) in June in Italy.  “Every year we see longer periods with high intense temperature and tropical weather,” Ettore Prandini, head of the farmer’s union, told Financial Times (“FT”) recently. Olive trees are moving to the Alpine mountains in the north and tropical fruits are being grown in Italy’s south. Italian farmers are grasping the opportunity.

Russia has become the world’s largest producer of wheat.  With milder winters, farmers are planting more winter wheat (harvested the following summer) which produces higher yields than spring wheat. Wheat production in Russia had always been done in the south.  Now, climate change has led to the large-scale melting of permafrost in northern Russia, including Siberia.

Grapes have become the “canary in the coal mine for climate change” says Elizabeth Wolkovich, professor at the University of British Columbia. According to her, a 3-4 degree F increase in average temperatures over the coming years would make 56% of the current wine growing areas unsuitable. After a scorching summer in France in 2003 spoiled the grapes in many French vineyards, some vintners moved their family wineries to the UK and Denmark.  According to winemaker Henry Warde, the “soil in Kent, England is similar to champagne soil and the climate conducive for growing grapes.” Taittinger and Vranken-Pommery are now making champagne in Kent.  This is not the first time grape harvesting has moved.  During the Medieval Warm Period (950 to 1250 AD) and the Little Ice Age that followed, according to FT, there were big shifts.

Two countries-Russia and Canada-may be the biggest beneficiaries from climate change. Areas that have been “northern wastelands” may become the major food producers for a world- with its increasing population.  Unfortunately, researchers believe that the shift in the climate will have a major negative impact on poorer countries.  Countries, such as Egypt, which has been producing wheat for itself and other countries as far back as Roman times, is now experiencing major problems with output because of the sizzling temperatures.

So, the question is:  “If heat and humidity are changing where crops are grown, what impact does this have on us humans?”

Fortunately, last week, the Washington Post published a great article from Ruby Mellen and William Neff on this topic. When it comes to heat, “the human body is remarkably resilient.  However, it’s the humidity that makes it harder to cool down and, humidity, driven in part by climate change, is increasing.”  To measure the threshold amount of the heat/humidity combination, scientists have developed a “wet-bulb temperature.”  They do this by wrapping a wet wick around the bulb of a thermometer.  The higher the number, the more water in the air, the harder it is for sweat to evaporate and for bodies to cool down.  At a certain limit of heat and humidity, it’s no longer possible to sweat enough to avoid overheating.  Areas such as Mexico, Central America, the Persian Gulf, India, Pakistan and Southeast Asia are already moving toward exceeding this unwelcome limit by 2075.

The human body is designed to try to cool itself when faced with hot temperatures. The skin sweats and the evaporation of this water cools the body, as long as the surrounding humidity levels allow the evaporation to take place. If the hot air is too humid, then the heat exchange doesn’t occur and the body does not cool off. The wet-bulb temperature sets a limit of 95 degrees F for what the human body can endure. But even 86 degrees can be dangerous. The authors say that “extreme humid heat overall has more than doubled in frequency since 1979.”

Even below these levels, cooling down is hard work for the body. The fight to cool down can put pressure on your heart and kidneys. A heat stroke can occur when your body temperature gets too high and causes your body’s proteins to break down and your organs to start shutting down.

Of course, we in the developed world have some simple ways to take of our body during heat waves:

In the Persian Gulf, extreme heat is now the new normal.  Qatar will be hosting the 2022 World Cup.  Qatar not only air conditions the inside of buildings, it now air conditions the outdoors, including the areas workers are using to build the new facilities.  They prohibit any outdoor labor when the wet-bulb temperature is above 89 degrees.

Our world keeps changing. We are very fortunate to live in the United States. We have air-conditioning almost everywhere. We can buy food and other products grown anywhere in the world in our stores. We can live in areas or move to areas with a lower wet-bulb temperatures, if we want.  And, if we use our brains, we can make sure not to put ourselves in a position to get a heat stroke.  In America, “It’s a Wonderful Life.”