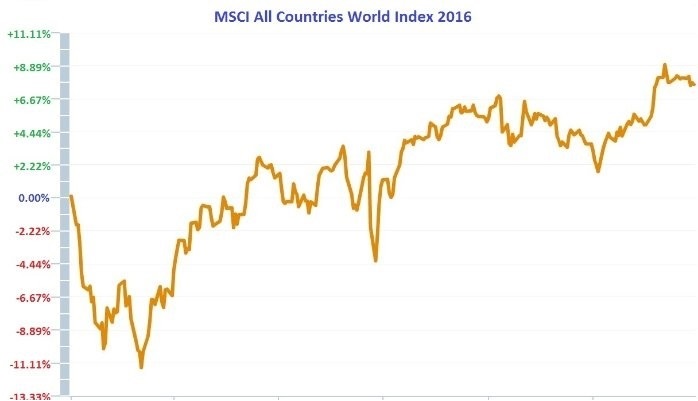 Over the holidays, I heard a lot of people whine about 2016 and how they were happy that it was over. Obviously, as a Cubs fan, I am biased. 2016 delivered a gift that has been waited upon for decades! One more time, “Go Cubs Go, Go Cubs Go, Hey Chicago, What Do You Say…” Sorry, I digress. Really, beyond breaking goat curses, what’s not to like about a year like 2016 when all major asset classes were up? For all the doom and gloom, not only early on in the year when stocks were getting hit in January, but also later in the year with Brexit and then during our “nasty” US Presidential Election, 2016 turned out to be a pretty darn good year for most investors.

Equities: The graph above shows the performance of the MSCI AC World Equity Index, which finished the year up 7.9% in 2016. You can see that it was rough going early on and definitely some blips here and there, but ultimately a solid showing. Large caps did well, as represented by the S&P500, up 12.0%. But the big winner was in domestic small cap value where the Russell 2000 Value notched in a 31.7% return! Mid cap* stocks also shined, up 20.2%. Emerging markets** sold off in 4q16 after the Trump victory, but still finished up 11.2%.  Value continued to outperform growth, in some cases, by a 2 to 1 margin. At DWM, our clients follow a diversified strategy within their equities portfolio which feature the areas above and a value tilt.

Fixed Income: 2016 was another positive year for bonds, but ended with a thud, if you’re looking at the most popular bond benchmarks. The Barclays US Aggregate Bond Index lost 3.0% in the fourth quarter, finishing 2016 up 2.7%. The Barclays US Aggregate Bond Index had a horrendous 4q16, down 7.1, and finished +2.1%. Why the fourth quarter sell-off? Well, the Trump victory caught a lot by surprise and created a “rotation” of assets in the markets. In other words, with Trump’s pro-growth/ decreased regulation / America-first agenda, people traded out of bonds (that can get hurt from this new expected inflation brought on by growth), and traded into domestic equities particularly smaller caps and industries currently weighed down by regulation like financials and those that will benefit from infrastructure spending. The 10-yr Treasury Note yield which went as low as 1.3%, with some even worried about potentially going negative, spiked up, closing at 2.4% to end the year. That, folks, is a huge move for bonds, but is something that can happen when rates have been held down artificially for so long, and forecasts what we may be in store for. These upward moves in yield bring downward moves in prices. With the Fed signaling three rate increase of 0.25% each in 2017, traditional bond index investors could be seeing flat to even negative returns in 2017 and beyond! Bonds are no longer the safe haven they have generally been for the last three decades. This is not your Grandfather’s Oldsmobile! If you’re heavily invested in bonds, make sure you are working with a professional wealth manager that can position the portfolio appropriately or you could be caught with your pants down. Here at DWM, we aren’t a bond “closet indexer” which means the components that make up our clients’ bond portfolio are quite different than that of those indices mentioned above. Furthermore, we feel we can better position the portfolio for this new environment by adjusting the duration – or sensitivity to rates – to a very low measure. Our DWM clients have benefitted from this approach.

Alternatives:  In general, alts had a positive performance in 2016. The Credit Suisse Liquid Alternative Beta Index which was up 5.4% for 2016. Winners included precious metals like gold**** +8.3%; MLPs† +14.8%; and catastrophe insurance-linked bonds‡ notching in at 8.8%. But all was not peachy. Hedge funds*** as of the latest data available (11/30/16) were only about flat on the year. And many managed futures had negative showings, having a particularly tough time with the trend reversals following Trump’s victory.

So after a year where a balanced investor may have had registered a handsome high-single digit return, now what? It really is hard to forecast what will happen in 2017 as nobody knows exactly how this new Trump agenda will play out. We do know that the latest US quarterly GDP reading was the best in two years at 3.2%. US unemployment at 4.7% is hovering around its nine-year low. US companies are coming off the sidelines and are starting to invest their cash piles. Beyond this recent optimistic attitude domestically, investors are even encouraged with the outlook in the Eurozone, Japan, and China, more so than just several months ago. Brighter economic fundamentals could lead this stock market even higher.

In conclusion, we’re at a very interesting time. It’s only several days until Trump takes office and when his administration and Republican congressional majorities start trying to do all of these pro-growth/pro-economy measures. The markets are up since Election Day because investors have bought into the theory that they will indeed be successful in cutting taxes, loosening regulations, and providing fiscal stimulus. If they are successful, the legs on this bull market will continue to grow. If they are unsuccessful, America might not be so great again. Only time will tell. In the meantime, DWM will continue to monitor all client portfolios in pursuit of protection and growth in this new environment.

As I could hear Joe Maddon, coach of the Chicago Cubs saying, “2016 was a pretty darn good year. Now let’s go out and do it again!” Hey Joe, at DWM, we’re up to the challenge!

****represented by the iShares Gold Trust

† represented by the Alerian MLP ETF