Hate to be the bearer of bad news, but if you haven’t been paying attention to anything Wall Street, it has been horrific. In the twenty plus years that DWM has been in business, we have never reported intra-year returns like these. Even when we revisit the ugliness of 2008 during the Great Financial Recession with the stock market falling over 35%, at least fixed income (up 5%) and some alternative investments provided some solid diversification benefits. Yet in 2022, stock and bond correlations have been very strong, strong as in “strongly down so far”. Most alternatives besides commodities and managed futures have been depressed as well. When you have almost all arrows flying in the same direction and that direction is down, it means disappointing results. So it’s no surprise that current sentiment is at extreme lows with the US teetering on recession. That all being said, although it’s extremely hard for many to see through the current murk, as the old saying goes: “it’s always darkest before the dawn.” We’ll get to some of the positives soon, but first let’s take a look at 3Q22 and YTD results. 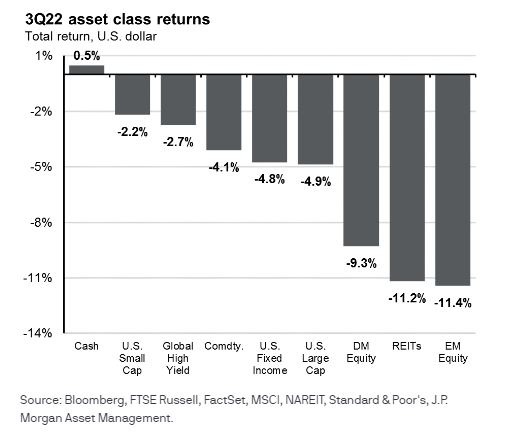 Equities: Stock markets sank again in the third quarter. US small cap fared “the best” only down 2.2% with emerging markets, -11.4%, faring the worst. European markets, in particular, are having a rough time, challenged by higher energy costs. Ironically, earnings growth remains relatively stable, but stock prices dropped as multiples deteriorated. Forward PEs on US stocks are now at 15.35, below the 25-year average of 16.85. International stocks are trading at significant discounts as shown in the chart below. 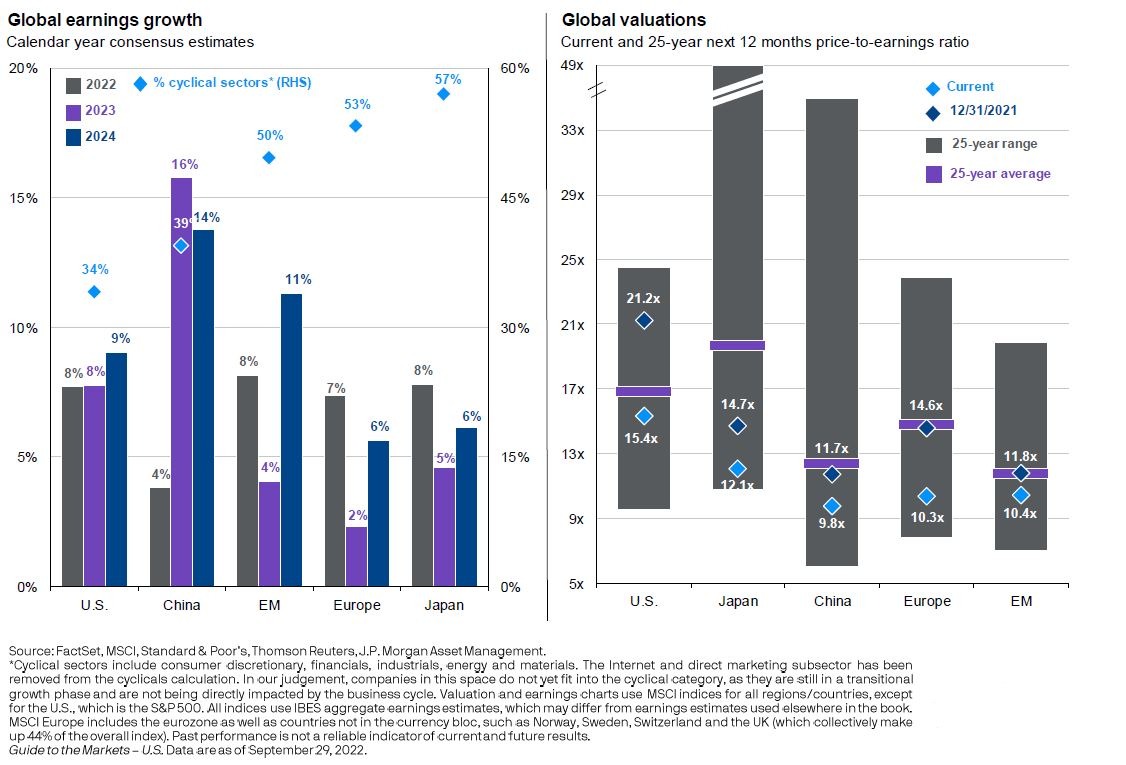 Fixed Income: In an effort to rein in inflation, the Fed continued to raise interest rates aggressively and has signaled that it will remain hawkish, further putting pressure on already beaten down bonds. The 10-year Treasury yield soared above 4% momentarily, something we haven’t witnessed since 2008, before ending the quarter just slightly under that level. Bond yields up mean bond prices down as seen by the Barclays Agg dropping 4.8% in 3Q22 and now off a jaw-dropping 14.6% YTD. One may not realize the gravity of this until reviewing historical bond returns via the chart below. This is not your grandfather’s fixed income asset class! 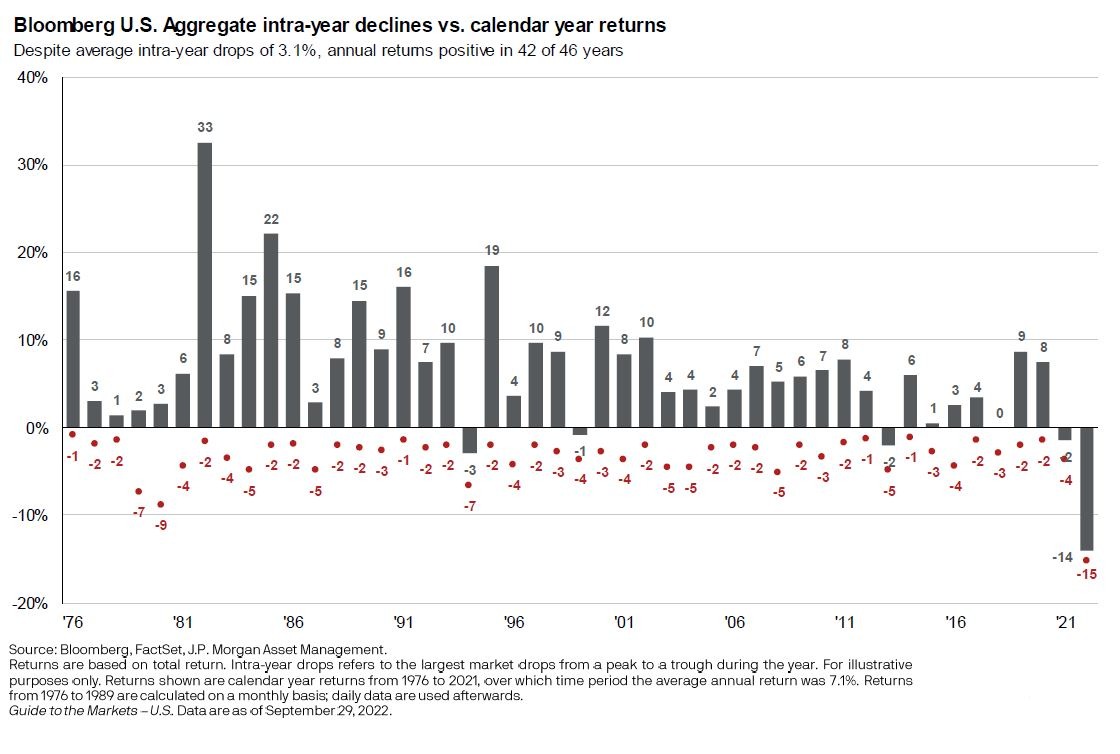 Fortunately, fixed income valuations, as represented by “yield-to-worst”*, look more attractive than they have in the last ten years. 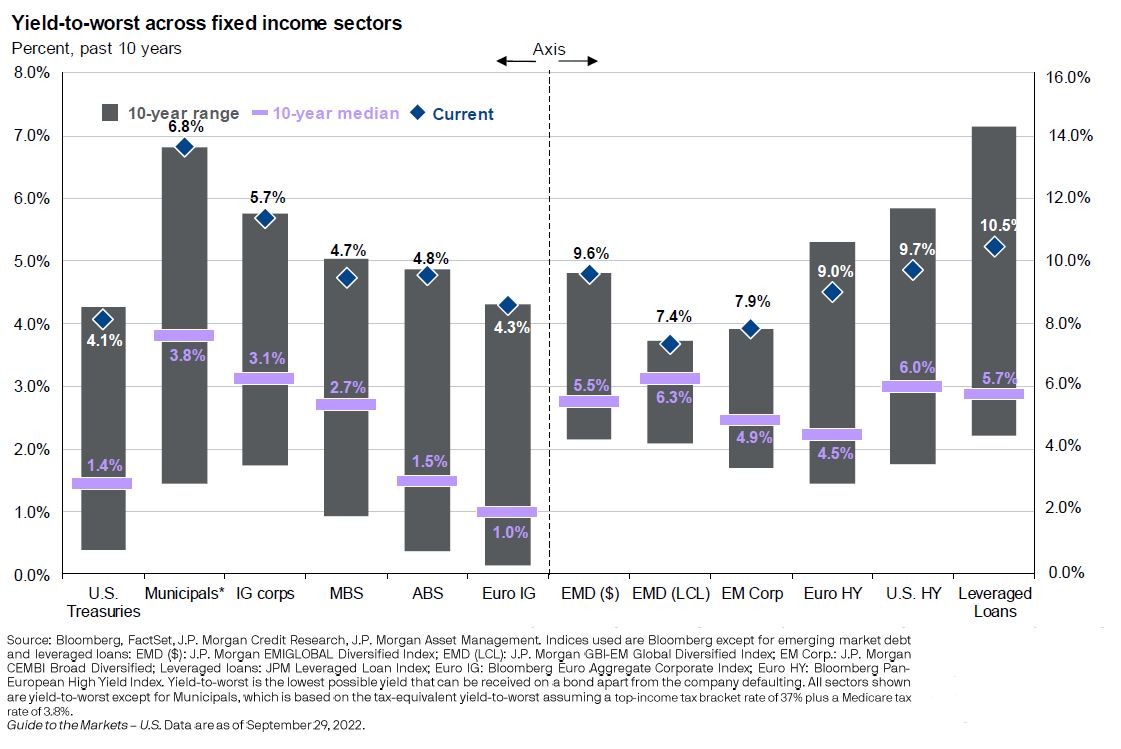 Alternatives: It was a mixed quarter for alts with the Morningstar Diversified Alts benchmark up 2.2% and the Wilshire Liquid Alts Index down 2.2%. For the year, they’re both down slightly, -2.1% and -8.0%, respectively. Commodities**, which had been one of the only positives spots this year actually pulled back, down 4.5% on the quarter and now up only 8.9% YTD. Managed futures*** (up 7.6% for 3Q22 & up 27.6% for YTD) were one of the only bright spots this quarter. More proof that the use of alts and multiple asset classes means greater diversification benefits and better risk-adjusted returns.

To sum it up, many diversified investors in 2022 find themselves seeing uncommon YTD returns that are off 15-25% and wondering what to do now and where to go from here. Many are also asking why the Fed is doing what it’s doing if its hurting both the stock and bond markets. Well, its all about killing off inflation, which is still near forty year highs. (Why is inflation so bad? Well, inflation hurts purchasing power – if you can’t buy as many goods and services as you did before inflation, your quality of living can eventually diminish. And if inflation stays elevated for too long, it can lead to ‘hyperinflation’, which is when expectations that prices keep rising fuels even more inflation. It can lead to a collapse in our currency’s value and wipe out the economy. Not good and why the Fed targets a 2% inflation level.) The Fed blew it in the last two years, choosing to keep quantitave easing going and keeping rates low and calling inflation then “transitory”. Sure, some elements of inflation will start alleviating with global supply chains improving like commodities, food prices, vehicles, etc. But unemployment is still really low, job openings really high, wage growth still high – those items tend to be more sticky. The good news is that we already are starting to see the effects of these higher interest rates cooling off the economy. The average 30-year mortgage rate was about 3.1% entering the year; now its over 6.7%, seriously putting the brakes on home sales and home prices – in fact, the Housing Affordability Index is now at it’s lowest level since 2006! Understanding their past recent mistakes, the Fed will contine to keep the hammer down until the inflation genie is put back in the bottle – and if that means sending the economy until a recession and sending the stock market lower, “so be it” in their view. See the chart below: if you look at the FOMC year-end estimates – what the Fed itself puts out – they are calling for rates to increase until the end of this year, up again in 2023, but then actually cutting rates in 2024! The fact of the matter is, and they know, history shows that recessions have always been able to bring inflation down to under the 2% target. That said, they’re basically signaling that they will continue to raise until the inflation problem goes away, but will need to pivot after putting the economy into a recession. Sounds crazy, right? Unfortunately, that’s the hand we all have been dealt with after the Covid-inspired fiscal stimulus pumping and easy money, and now it’s like suffering the hangover after the party. 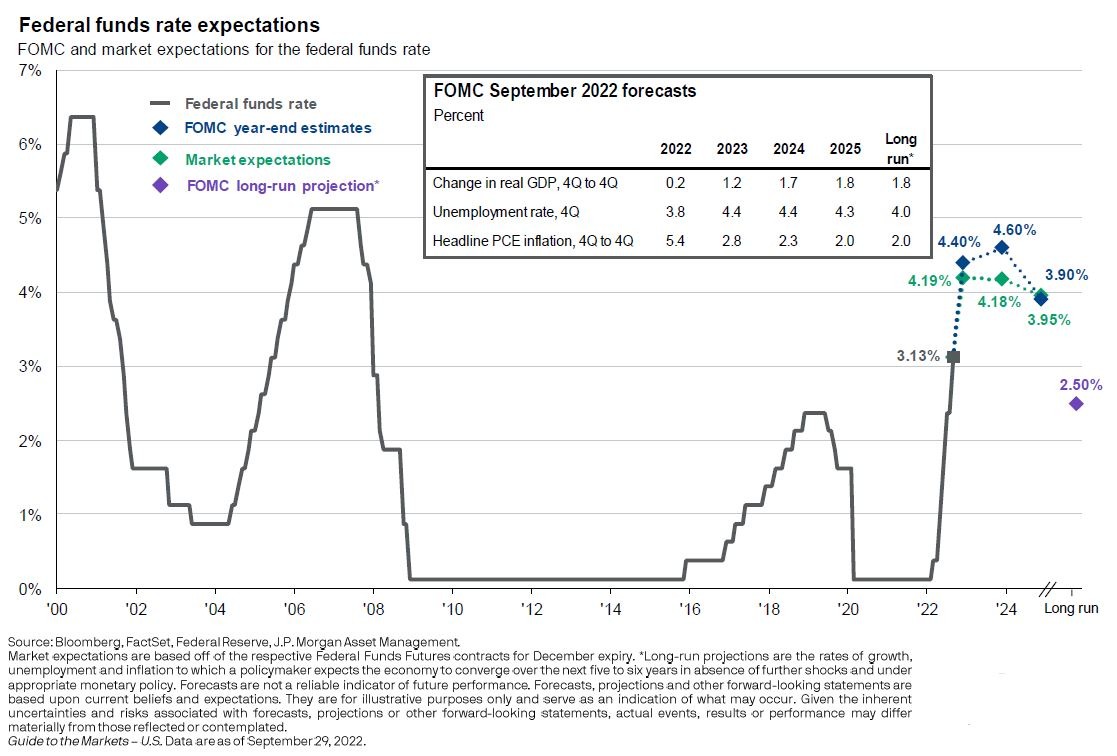 What shouldn’t go lost on everyone is how forward looking the market is. The stock market always starts rising before the unemployment data peaks. The moral of the story here is that one cannot wait for economic data to go positive or “things feel better”, because the market will have already moved back up before then and you will have missed it. In other words, it is always darkest before the dawn. It may feel pretty dark and murky now, but the sun will eventually return, as the market inevitably recovers and eclipses its former peak. 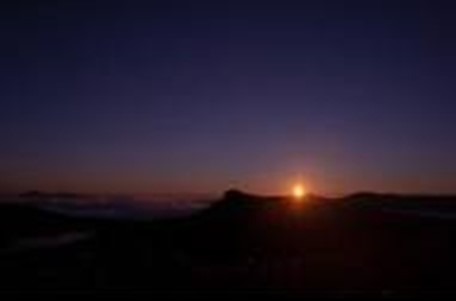