DWM’s 4Q22/Year-End Market Commentary: The Start of a New Day???

The theme of last quarter’s market commentary was that it’s always darkest before the dawn. We talked about how badly the markets had fared so far in 2022 and how gloomy consumer sentiment was. If you look up “dawn” in the dictionary, you’ll see “the beginning of a phenomenon or period of time, especially one considered favorable”. We can’t be sure if this is truly the start of a new day, but markets certainly dawned bright and sunny to start the final quarter of 2022. Let’s take a look at 4Q22 and YTD results

Equities: Stock markets showed new light in the fourth quarter with the S&P500 gaining 7.6%, albeit closing the year down 18.1%, its worst year since 2008. International markets* shined bright in 4Q22, up 14.28%, but still down 16.0% on the year. International markets get a boost when the US Dollar falls, which is clearly seen in the chart below – we wouldn’t be surprised if that trend continues. Value stocks continued to outperform growth stocks, thus further strengthening the notion that valuation is something that matters - very unlike 2020 & 2021 where some megacap names soared to ridiculous levels. Interestingly enough, many of those names have fallen back to earth just in the last 3 months, with Tesla down 55%, Amazon down about 30%, Apple and Alphabet down about 13%. The forward PE on US stocks closed the year at 16.7x, pretty much in-line with the historical 25-year average. 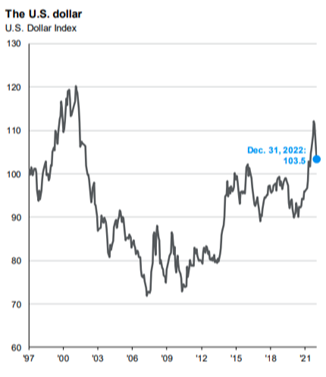 Fixed Income: After the worst nine-month start in modern history, bonds started to illuminate evidenced by the Barclays Agg returning a positive 1.9% in 4Q22, yet still down a dreary 13.0% for the year. As we noted in our last commentary, fixed income valuations going into the quarter looked more attractive than they have in the last ten years. After so much carnage, there is opportunity. Of course, as we regularly point out: bond prices move inversely with interest rates. So fixed income will always be dictated by what the Fed is doing with those. And many of us know that the Fed is currently at war with inflation and trying to win that war by raising rates. And raise rates, they have done as shown in the chart below. They’ve never raised rates this strongly and quickly, and there’s a good chance that they overshoot and will have to pivot as early as 2024 and bring rates back down! But as we said last quarter, they’re okay with that.  “The fact of the matter is, and they know, history shows that recessions have always been able to bring inflation down... That said, they’re basically signaling that they will continue to raise until the inflation problem goes away, but will need to pivot after putting the economy into a recession. Sounds crazy, right? Unfortunately, that’s the hand we all have been dealt after the Covid-inspired fiscal stimulus pumping and easy money, and now it’s like suffering the hangover after the party.” The good news is that the hikes should be getting smaller and ending soon – it’s quite possible the Fed will be in “pause” mood by the end of spring. That will be a very positive sign for bonds. 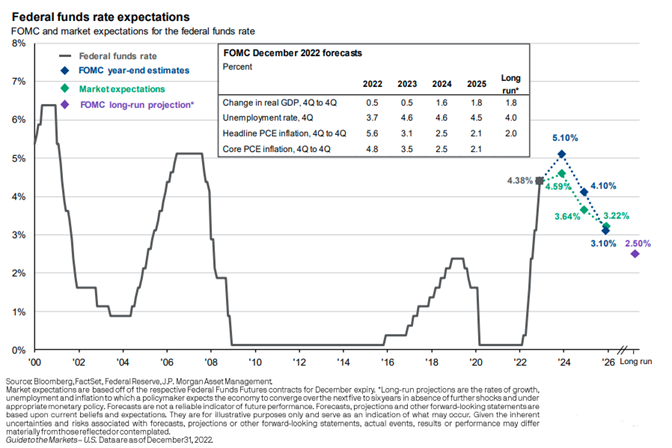 Alternatives: It was another mixed quarter for alts with the Wilshire Liquid Alternative Index down 1.3%, thus finishing the year down a modest 5.7%. The only real winners this year, not just for alts but pretty much anywhere, were commodities and managed futures. Commodities** continued to shine in the 4q, up 7.3%, capping the year at 17.2%. Managed futures*** actually struggled in 4Q22, down 5.8% due in part to the whipsaw in the equity market, but still up a handsome +21.1% on the year. The areas within alts that struggled were ones that have some correlation to the equity markets like real estate****, down 23.9% on the year.

The chart below sums up the gloomy year that was 2022… 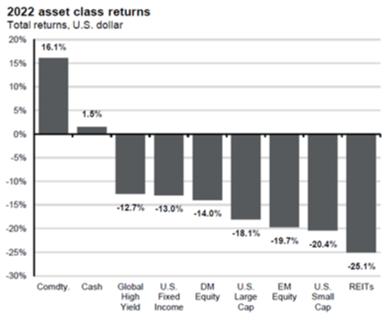 After a couple of highly profitable years for investors, 2022 proved to be a sobering event. According to JPMorgan, a 60/40 portfolio – one with 60% invested in stocks and 40% in bonds – was down 16% in 2022. Besides 2008, that was the worst reading since the 70’s. Fortunately, those with the additional asset class of alts performed a little better but still most are looking at double-digit percentage losses in 2022. Yuck!

So what now? It can be easy, particularly in today’s world of constant info barrage, to get caught up in the short-term and be fixated on the darkness. Many naysayers will predict gloom from inflation/slowing growth/recession/etc. But if we focus on the long-term and look forward a year or so, things could be much better. By then, the war on inflation should be in the rear-view mirror. Further, as we mentioned above, valuations amongst most asset classes look attractive relative to historical levels. And, finally, we don’t want to forget how forward looking the market is.

The chart above shows the major market corrections since 1987. In each event, the market was significantly higher twelve months later! The moral: markets don’t wait for everything to be perfectly radiant before turning upward. You’ll always miss the first light of day if you try to time the market like that. It may be that the dawn has in fact already arrived. Don’t oversleep and miss out on what could be a beautiful day! 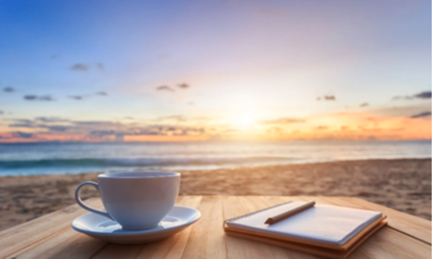