Economy Celebrates 10 Years of Growth: Is it Time to Party? 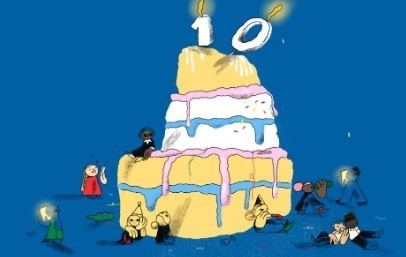 Next week will mark the 121st month of the current bull market- the longest business cycle since records began in 1854. Based on history, a recession should be starting soon. Bond rates now form an “inverse yield curve” with shorter term rates above longer term, which typically signals a downturn. Business confidence is down. However, 224,000 American jobs were created in June and equities continue to soar, rising 16-20% year to date. Is it time to party or not?

The business cycle appears to be lengthening. The current expansion, coming after the worst financial crisis since the Great Depression, has been unusually long and sluggish. Average GDP growth has been 2.3% per year, as compared to the 3.6% annual growth in the past three expansions. The workforce is aging. Big firms invest less. Productivity has slipped. And, Northwestern Economics Professor Robert Gordon continues to assert that American’s developments in information and communication technology just don’t measure up to past achievements including electricity, chemicals and pharmaceuticals, and the internal combustion engine.

However, the changing economy may now be less volatile for a number of reasons. 1/3 of American’s 20th century recessions were caused by industrial declines or oil-price plunges. Today, manufacturing is only 11% of GDP and its output requires 25% less energy than in 1999. Services are now 70% of our GDP. Furthermore, the value of the housing market is now 143% of GDP, as compared to a peak of 188%. Banks have lots of capital.

Finally, inflation has been very low, averaging 1.6% in the U.S. (and 1.1% in the euro zone) per year during the current expansion. In earlier business cycles, the economy would surge ahead, the jobs market would overheat, causing inflation to rise and leading the Federal Reserve to put on the brakes by raising interest rates. Today, it’s different. Even though the unemployment rate is at a 50 year low of 3.7%, wage growth is only 3%. As the Economist pointed out last week in “Riding High,” American workers have less bargaining power in the globalized economy and are getting a smaller percentage of company profits, keeping inflation down. The Fed recently announced that it is less concerned about rising prices and more concerned about growth slowing and, therefore, will lower interest rates at its meeting next week.

Changes in the economy to slower growth, more reliance on services and lower inflation all contribute to longer business cycles. Yet, the changing economy, particularly globalization and technology, has also produced new risks.

Manufacturing that was formerly done in the U.S. is now outsourced to global producers. These chains can be severely disrupted by a trade war. This could produce a major shock- imagine if Apple was cut-off from its suppliers in China. Also, take a look at the impact that the prolonged grounding of Boeing’s 737 MAX is having on the U.S. economy. It’s hurting suppliers, airlines, and tens of thousands of workers, while $30 billion of the MAX sit grounded. Global supply chains are extremely interconnected these days.

IT is significantly linked as well. Many businesses outsource their IT services via cloud-computing to a few giants, including Alphabet (GOOGL). 85% of Alphabet’s $100 billion annual sales comes from advertising, which in the past has been closely correlated to the business cycle. GOOGL invested $45 billion last year, 5 times more than Ford. In fact, the S&P 500 companies invested $318 billion last year, of which $220 billion was spent by ten tech companies. The big IT companies are now facing regulatory issues worldwide. What would be the worldwide impact if GOOGL, Facebook or others get their “wings” clipped?

Also, finance issues could disrupt the expansion. Although housing and banks are in decent shape, private debts remain high by historical standards, at 250% of GDP, or $50 trillion. And, if the prime lending rate continues to decline, banks’ profits and balance sheets will likely weaken.

Lastly, politics is a big risk. There are the threats of trade wars with China and physical war with Iran. The big tax cut that pushed markets up in 2017 could now produce lower year over year earnings for companies. On Monday, July 22nd, Congressional leaders and White House negotiators reached a deal to increase federal spending and raise the government’s borrowing limit. This would raise spending by $320 billion, at a time when the annual deficit is already nearing $1 trillion, despite the continuing expansion.

Conclusion: Changes in the economy have produced reasons why business cycles are longer, yet more sluggish. Those changes have also added new risks for a continuing expansion and bull market. No one can predict the future. Focus on what you can control: Make sure your risk level is appropriate for your risk profile. Make sure your portfolio is prepared for the next downturn. And, yes, stay disciplined.