Equity Trades are Free - But there is no Free Lunch 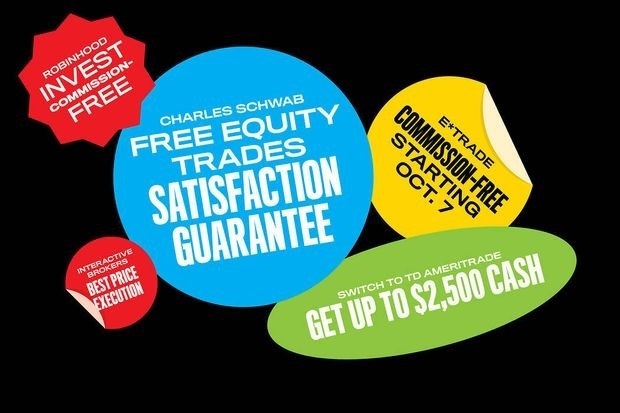 Before 1975, brokers had it really good. Commissions were fixed and regulated-at very high levels. It would sometimes cost hundreds of dollars to buy 500 shares of a blue-chip stock. That changed in 1975 when the SEC opened commissions to market competition.  A young Chuck Schwab and others became discount brokers- often charging ½ or less of the old rates. Since then, fees have continued to fall and earlier this year, trades could be made for $5 or less. Now, Charles Schwab & Co. as well as TD Ameritrade, E*TRADE and others have cut stock and ETF trades to zero. Free trading of equities has arrived.  Please be advised, though, that there is no free lunch- brokers profit from you even if they don’t charge for equity trades.

Here are some the main sources of income for brokerage firms:

Let’s focus first on uninvested cash. In 2018, 57% of Schwab’s income came from loaning out its customers’ cash. As is typical in the brokerage business, uninvested cash is swept to an interest bearing account. However, sweep accounts typically earn almost nothing- usually ½ to ¼ of 1% or lower to the investor.

Schwab had a total of $3.7 trillion of deposits, with about 7% of it ($265 billion) in cash earning nice returns for them. Assuming a return of 2.5 % on the uninvested cash, that’s a return of $6.6 billion. The cost of that money was likely ½% or about $1 billion, with Schwab netting about 2%. $5.7 billion of Schwab’s $10 billion net revenue in 2018 was earned on its customers’ cash. Virtually all the brokers use the same model with uninvested cash.

Robo- advisors generally use the same format. Virtually all of them charge lower fees but require a certain amount of cash, between 4% and 30% in their pre-set asset allocations. Yes, there is a small sweep account interest paid on those funds, but not much. And, this is all typically disclosed. The rate paid on clients’ cash “may be higher or lower than on comparable deposit accounts at other banks” is a typical warning.

The use of uninvested cash is income for the brokers and reduction in performance for the investors. Let’s say your portfolio has 10% cash generating a 0% return. If your annual return on the invested 90% in your portfolio is 6%, then the return on 100% of the account is only 5.4%. A huge difference over time. As an example, the difference between earning 5% per year versus 6% a year on $100,000 for 30 years is $142,000.

Now, let’s look at the operating expense ratio (OER). OERs are charged by mutual funds, index funds and ETFs. If a fund has an expense ratio of 1%, that means you pay $1 annually for each $100 invested. If your portfolio was up 6% for the year, but you paid 1% in operating expenses, your return is actually only 5%. The OER is designed to cover operating costs including management and administration.

The first mutual funds were actively traded, meaning that the portfolio manager tried to beat the market by picking and choosing investments. Operating expenses for actively managed funds include research, marketing and significant administration with OERs often at 1% or more. Index funds are considered passive. The manager of an index fund tries to mimic the return of a given benchmark, e.g. the S&P 500 Index. Index funds should have significantly lower operating expense ratios. Evidence shows that actively managed funds, as a whole, don’t beat the indices. In fact, as a group, they underperform by the amount of their OER.

Operating expense ratios, primarily because of increased use of index funds and ETFs to minimize costs, have been getting smaller and smaller. In fact, we have seen some funds at a zero operating expense ratio. However, for these funds, a substantial amount (10% to 20%) of cash is maintained in the fund.

Conclusion: Set a target of 1-2% cash in your portfolio. Stay invested for the long term.  In addition, the investments in your portfolio should have very low OERs, wherever possible. However, in selecting investments, you need to look at both the OERs and the typical cash position of the mutual fund, index or ETF. Even if the OER is zero and the security holds 10% in cash, your performance on that holding will likely only be 90% of the benchmark, at best. Remember, when equity trades are free, brokers will continue to look for ways to make money, often at your expense.