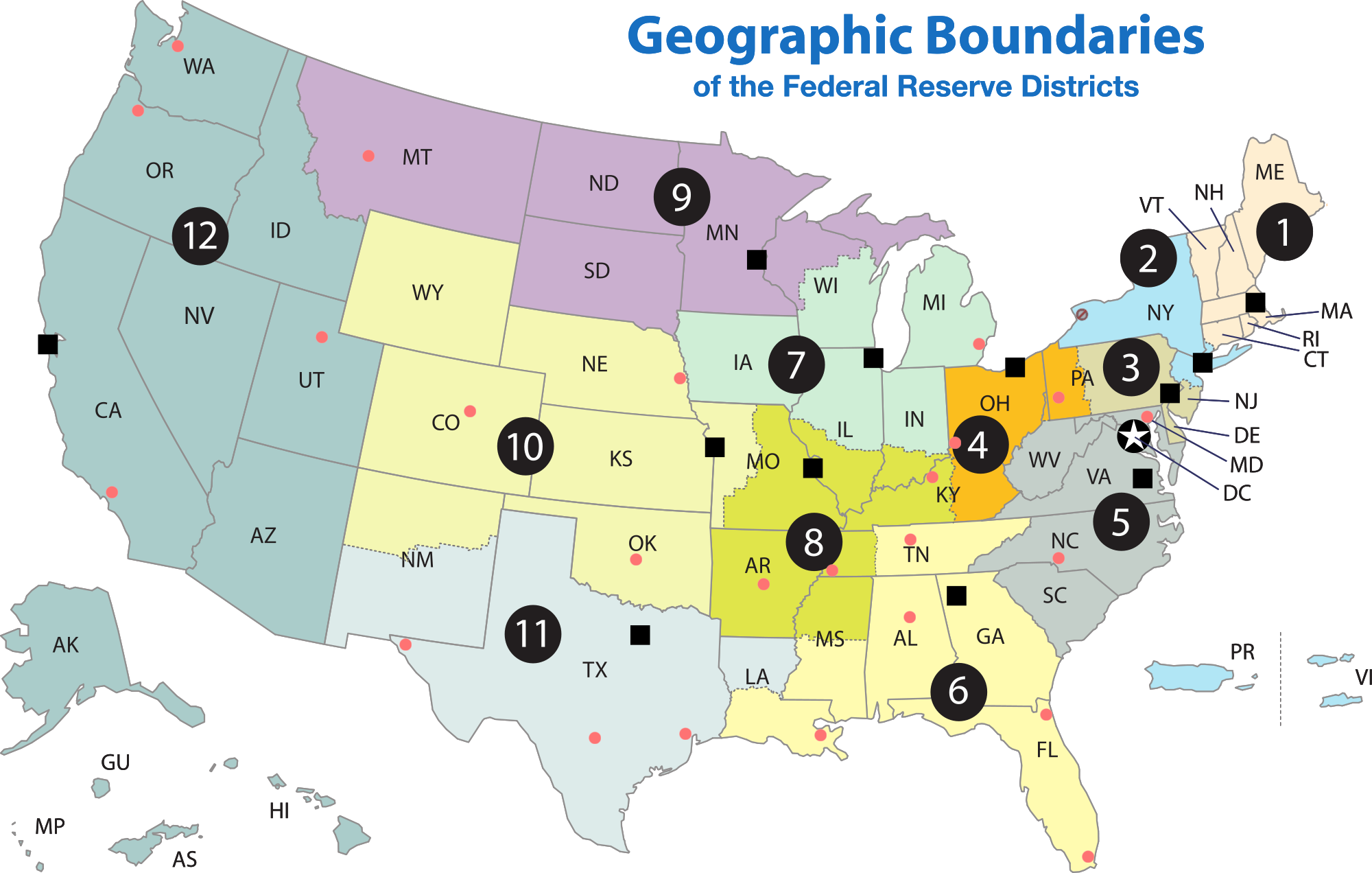 Throughout 2022 the Federal Reserve, rate hikes, and inflation have been the subject of many conversations. While everyone has been hearing about these topics, it can be unclear what they really are and how they are connected to each other. We’ll take a look at the Federal Reserve; what it is, why it was created, and how it operates to achieve its objectives.

What is the Federal Reserve?

The Board of Governors has seven members each nominated by the President and approved by the Senate. Each member serves a maximum term of 14 years and appointments are staggered by two years to limit power of the president. Law dictates that these appointments represent all broad sectors of the U.S. economy.

There are 12 banks, each responsible for different regions of the United States. Each regional bank has its own president to preside over their respective Federal Reserve district. The 12 locations are:

The whole Federal Reserve System is overseen by and accountable to Congress.

Why does the Federal Reserve exist?

The Fed has identified 2% as the inflation rate which stimulates the economy enough to support maximum employment while keeping prices stable enough to reign in long term interest rates.

In the past, the 2% inflation target was a ceiling that the Fed did not want to surpass. In 2020, Fed Chair Jerome Powell changed that to a target of 2% on average. This means that now the Fed’s policy allows inflation above the 2% target for some periods of time to counter periods when inflation is below the target. While this policy in and of itself is not necessarily bad, it may have contributed to a delayed response from the Federal Reserve in combating recent rising inflation.

How does the Federal Reserve operate?

One of the primary tools used by the Fed in setting monetary policy is the federal funds rate. Banks hold reserves at the Fed to settle the roughly $½ trillion of non-cash transactions that are made by U.S. consumers and businesses every day. Banks may borrow or lend these reserve funds to each other depending on their liquidity needs. Banks must meet reserve requirements (also set by the Fed) to ensure they can cover withdrawals. The federal funds rate is the interest rate banks pay to borrow reserve funds overnight in order to meet their reserve requirements. The FOMC sets the target for the federal funds rate and banks use it as a reference point for the interest rates they charge on their other loans. As such, a change in the federal funds rate works its way out to interest rates in the broader economy making it an effective tool for setting monetary policy.

Open market operations (OMO) are another strategy in the Fed's tool belt. This involves the Fed buying short term Treasury securities in the open market. This increase in demand raises the prices and lowers the yield of these securities while simultaneously injecting cash into the banking system which can then be loaned to businesses to help stimulate the economy.

Quantitative easing (QE) is a strategy usually employed when open market operations have failed to have the desired effect. When conducting QE, the Federal Reserve is trying to boost economic activity by buying securities in a particular area of the market, similar to OMO, but in a way that targets particularly distressed areas.

The FOMC’s next meeting will be held on December 13th-14th. We’ll have to wait until then to hear what changes they may be making, but hopefully this has shed some light on what the Federal Reserve is as well as why and how they operate.