FIREd Up about Early Retirement 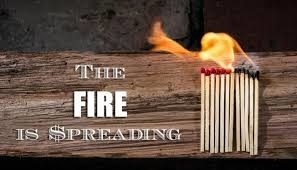 There is a recent trend among Millennials and younger Gen Xers that is generating a great deal of interest. The concept is defined by the acronym FIRE – financial independence/retire early. A WSJ article from November follows the rigid budget and sacrifices of Sylvia, who wants to retire in 2020 with $2 Million at age 40. The current rage to extreme early-retire by using frugality, intense saving and/or investment strategies to achieve financial independence is becoming a popular notion. This purportedly comes from the 20 to 40 somethings who have a ‘burning’ desire to not be chained to a job, but rather want to freely choose how they spend their time. The FIRE followers want the freedom of financial independence to allow comfortable “retirement” at an earlier than usual age.

FIRE and the discussion around it has inspired many recent blogs, podcasts, articles, books and even a documentary coming out this year called “Playing with FIRE”. Playing with Fire follows a family as they “test their willingness to reject the standard narrative of adult life, which basically prescribes: go to college, take out tons of student loans, buy a new car, take on a mortgage, buy another car and lots more stuff you don’t need, then work for 40+ years to pay for it all. If you’re lucky, you might be able to retire at 65 and not have to eat cat food.”  Now that is cynical!

On the surface, however, retiring early sounds like a reasonable goal… we are all striving for some level of financial independence, after all. At DWM and as financial advisors, we definitely believe that controlling spending and sticking to savings goals are the keys to reaching financial independence. Most of us would consider these good money habits to be a common sense approach to life – live below your means, save more, be less materialistic- but what does it take to actually achieve an extreme early retirement in your early 40s or even 30s and make sure you have enough money for the rest of your life? FIRE followers believe extreme saving and frugality is the path. As the Investment News article describes it “Followers of FIRE amass savings voraciously and live on bare-bones budgets. They aim to stockpile enough money to fund a retirement lasting roughly double that of the average American.” Apparently, the retirement savings number that they strive for is based on a future 3-4% percent withdrawal rate that might have to last 60 years!

FIRE followers advocate aggressive savings goals of 50-75% of earnings and following strict budgets to achieve this. They focus on cutting back or even cutting out all non-essential spending like going out to eat, vacations or bigger houses and newer cars. Or like Sylvia from the WSJ article reportedly does, search for the brown bananas and borrow Netflix passwords. This might be where we should talk about quality of life!

On top of that, the unknowns in this strategy could wreak havoc on the best-laid plans. Some in the FIRE movement live austere lives now and plan to continue the austerity into the future to maximize their savings. All well and good as long as nothing unexpected happens. How about the often unforeseen or underestimated expenses that come from having kids or running into health problems? We can try to predict the impact on our portfolios from inflation, the economy, the markets, investments, but we really can’t say absolutely what will happen in the future. We know that healthcare costs are increasing and becoming a large spending item in normal retirement, especially before Medicare begins. We know that we can’t predict what will happen to Social Security.  We certainly can’t predict our life spans – whether short or long – nor are we ever as ready as we would like for emergencies and crises like natural catastrophes, death of a loved one or chronic illness. We simply don’t have that crystal ball!

There is also an underlying degree of cynicism in this mindset that our working life is focused solely on the goal of amassing “more stuff”. What about the satisfaction and connection that comes from building a career and a level of accomplishment and expertise in a field? Many of us have had several varying career paths and, had we jumped off after the first one, what would we have missed? What inventions or discoveries or achievements would humanity miss out on if the productivity and challenges that are gained from a lifelong career were cut short?

Successful financial independence does come from hard work, discipline and a measure of frugality and sacrifice – we can all agree on this. At DWM, our goal is to help guide you toward achieving your goal of financial independence, whether you keep “working” or spend your time in other ways - as you wish. We try to minimize some of the risks by planning for as many of the “What Ifs” as we can and hope that, by charting a course, we can help you breathe easier as you plan for the future. We want you to be “fired up” for your whole life and find satisfaction and quality of life during your saving and accumulating days, as well as your spending and legacy days. We think this is possible by following a balanced, moderate and careful financial plan. We can certainly get fired up about that!