Follow the Money - China Working to Make Inroads on Greenbacks! 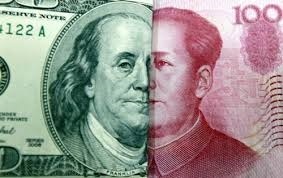 When the world’s investors get nervous about their money, they put it in the safest place they know, the United States Dollars (“USD”). When the COVID-19 pandemic erupted earlier this year, U.S. Treasuries were the safe haven. Today, 62% of the planet’s “reserve currency” is in “greenbacks.”  That’s a big deal for America.  And, not surprisingly, China wants part of that.

Let’s look at the role of international currencies, the benefits of a “strong” or “weak” dollar and how and why China wants to make the yuan a central-bank reserve favorite.

There are 180 international currencies.  Many countries have their own. The euro is the currency used by 19 members of the 27 member EU.  All of these currencies have three functions.  First, as a “unit of account,” or a way to measure value.  Second, it’s a medium of exchange- most commodity contracts, e.g. oil and gas, are denominated in USD. Third, “reserve currencies” are foreign currencies held in significant quantities by other central banks that can be used for international transactions, international investments and all aspects of the global economy.

America has more clout than other countries because its money is so central to the system of international cash flows.  All issuers of reserve currency get three major benefits:

China, with its expanding international role, wants a bigger share of these benefits.

These days the USD is strong (96 on the USD index). It hasn’t always been. The index started in 1973 at 100.  Back in April 2008, after the Bear Stearns collapse, the index declined to 71.  Back then, international investors, believing the financial crisis would only impact the U.S., put their reserve currency in the euro.  The euro moved up to a value of $1.31 then. Generally, the USD does the inverse of the euro.  When the euro rises, the USD falls. In 2014 the USD index rose to 90 as the euro fell to $1.21 due to fear about the Greek debt crisis and lower euro bond interest rates. Today the euro is at $1.16.

While a strong USD is great if the U.S. government wants to borrow trillions at low interest rates to pay for deficits or for infrastructure, for example, or if you are traveling abroad and want to buy European goods or prices at low prices, there are some major downsides to a strong dollar.

A weak US dollar is often better for the economy.  Essentially if the US dollar is worth less relative to other currencies, foreign countries are likely to buy more American goods boosting things like US manufacturing and closing the trade gap deficit. China, focused on international trade, has kept the value of its currency, the yuan, low, currently at 6.9 yuan to $1.

The 6.9 yuan exchange rate may be as much as 45% too low.  Many of you are familiar with the Big Mac index, started by the Economist in 1986.  We've done a few blogs on it in the past, in 2018, 2015, and 2012.The concept is to annually determine “purchasing power parity” between countries, using how much residents of each country pay for a Big Mac in their local currency.  Today, it costs the Chinese 21 yuan to buy a Big Mac versus $5.71 for an American.  By that measure, it takes only 3.8 yuan (21 yuan/$5.71) to buy as much as a dollar.  Yet, the exchange rate is 6.9.  This means that the international exchange rate for yuan is 45% less than the purchasing power parity of the yuan within China.  That’s a huge advantage for China in its exporting.

In addition, in 2013, China started the “Belt and Road Initiative” (also called the 21st Century Maritime Silk Road) which is a global infrastructure development strategy to assist countries in Asia, the Middle East and Africa.    The investment was $15bn last year in roughly 70 countries, a quarter of which was in yuan. Some European countries, especially France, are doing most of their trades with China in “redbacks,” rather than USD.  It appears that China’s plan is to obtain world domination through a China-centered global trading network.  The fact is that China’s own GDP is now 99trn yuan each year.  Using the 6.9 exchange rate, that’s about $14trn USD which would put China in second place behind America’s GDP of $21.4trn.  However, if we compare purchasing power parity at 3.8, China’s 99trn yuan GDP is more like $26trn.  Not a surprise, China is 4X the population of the U.S.

China now settles 15% of its worldwide trade in yuan, up from 11% in 2015.  In addition, China is now selling bonds and receiving foreign investments in yuan- promoting the “redbacks” as offering good yields and diversification.  China is expanding its share of global reserve currency; now at about 3%. China has signed currency swap agreements with over 60 countries. As a result, the IMF finds the “yuan bloc” (China and those countries dealing primarily with them) to account for 30% of global GDP.  They are still second to the “U.S. bloc” at 40%.

It’s always important to “Follow the Money.”  These days it means following both greenbacks and redbacks- the USD and the Chinese yuan.