How Long Will You Live? 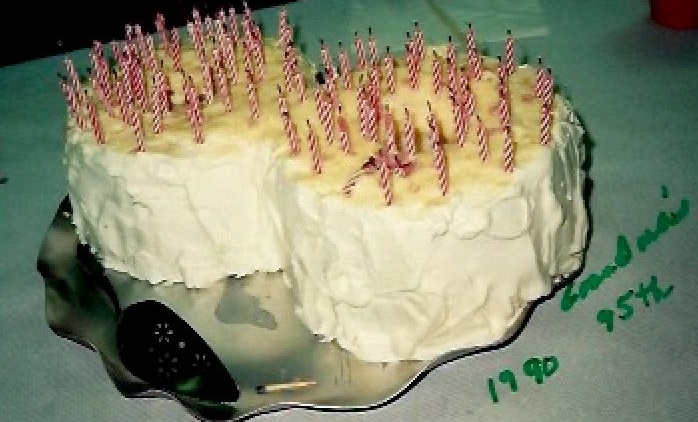 The cakes above had 95 candles. It marked the birthday celebration for a wonderful lady, Avis Roodhouse, Elise’s maternal grandmother. The flame from the candles was so hot that day that it melted the icing while the crowd roared. We all had a fantastic time at the party. Grandma lived a super life, with two highlights-her family and the day electricity came to the farm.  Like the candles, her life, journey and many accomplishments came to end the following year. It was her last birthday. How many candles will there be on your last birthday cake?

We Americans are living longer. Overall, it’s likely that more Americans will reach 100 in the coming decades.  According to the NYT in an article this week on longevity, the UN reported 450,000 centenarians as of 2015 and likely 25 million by 2100.  In fact, the number of supercentenarians (110+) is expanding greatly as well. Some notables: Jeanne Calment lived 122 years in Arles, France from 1875 to 1997. The longest living American was Sarah Knauss, of Allentown, PA, who died in 1997 at 119 years of age.

Today our global population is growing- almost 8 billion. With continuing medical and social advances, scientists are trying to determine the potential longevity of humans. Back in 1825, when there were one billion people on our earth, an early British actuary named Benjamin Gompertz was puzzling with the same question.  His mathematical model concluded that the risk of death increased exponentially with age. (Of course, the average age at death then was 35.) However, Gompertz also concluded that as “people entered old age, the risk of death plateaued.” In subsequent decades, other scientists found a pattern of “accelerating death rates followed by mortality plateaus.”  In 2018, a study published in Science magazine concurred with the acceleration/plateau theory by suggesting that someone alive at 105 would have a 50/50 chance to reach 106. The same held true for each succeeding year.  Their report indicates that the probability of life continuing at that point is a bit like throwing a coin each year.  With a chance of 50% heads and 50% tails, there is a very small probability (actually one in a 1,000) that heads will come up 10 times (years) in a row. So, roughly the odds of someone aged 105 being alive at 115 is about 1 in 1,000.

Yet, switching perspectives, famous scientist, Richard Feynman in 1964 said, “There is nothing in biology yet found that indicates the inevitability of death.” There are organisms in sea beds that have been there 10 million years.  A colony of aspen trees, with a single root system, in Utah has lived for at least 14,000 years. Theoretically, any organism with “a continual supply of energy, a sufficient capacity for self-maintenance and repair and the good fortune to evade all environmental hazards could survive until the end of the universe.”

In addition, there is a huge difference in life span among species. Biologists say that is the result of anatomy and lifestyle. “Small and highly vulnerable animals tend to reproduce quickly and die shortly thereafter, while larger animals, usually reproduce later in life and live longer.”  Humans have longer lives but we do age, our immune systems weaken and our self-repair mechanisms fail.  While there is “no programmed death clock ticking inside of us- eventually the human body just can’t keep giving.”

However, recently researchers have been working to reverse and/or postpone aging.  In December 2020, Dr. David Sinclair partly restored vision in middle-aged and ailing mice by reprogramming their genes.  According to Dr. Sinclair, “Aging is far more reversible than we thought.”  His goal is to establish “reset” programs in humans, perhaps every decade, to undo the effects of aging in the body.  Dr. Sinclair’s book:  “Lifespan: Why We Age-and Why We Don’t Have To” is excellent.

Of course, while many would love to sustain life for centuries and enrich their human experience, have the chance for several fulfilling and diverse careers, and maybe seeing their great-great-grandchildren, there are others that see an extended lifetime as a “doomed pursuit.” Their concern is the potential for overpopulation, with millions, perhaps billions, of “superseniors stifling new generations and impeding social progress.”

In closing, I will again invite y’all to my 100th birthday.  It’s only 27 years away and I hope to blow out all the candles with many of you watching. Also, many DWM clients know that when we help them review their long-term planning, we sometimes show their “eventual age” at 100 or more. Of course, none of us knows how long we will live.  Yet our planning at DWM is designed so that, if you do live to 100, you’ll be financially set the rest for your life, however long that is, even after picking up the tab for your 100th Birthday Party!!  Caution: it may not be your last one!!