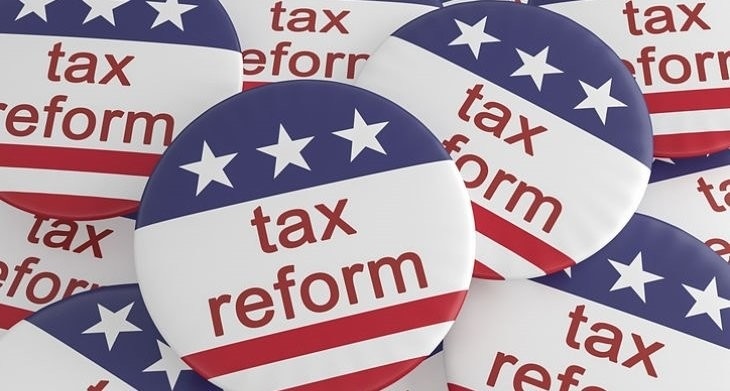 Last Wednesday, President Trump’s one-page Tax Reform Proposal was released. We expect the Administration will soon discover that Tax Reform is similar to Health Care Reform. President Trump’s February 27th “epiphany” concerning Obamacare was expressed this way: “Nobody knew that healthcare could be so complicated.”

Tax Reform isn’t simple either. The last major Tax Reform was in 1986 and it took years of bipartisan effort to get it done. In 1983, Richard Gephardt of Missouri and Bill Bradley of NJ introduced a tax reform bill to cut rates and close loopholes. The proposal was predictably attacked by special interest groups and didn’t gain much traction.

Dan Rostenkowski, Democratic chairman of the House Ways and Means committee and Bob Packwood, Republican chairman of the Senate Finance Committee were tasked with getting the bill passed. It wasn’t easy. Ultimately, many loopholes and “tax shelters” were eliminated, labor and capital were taxed at the same rate, low-income Americans got a big tax cut, corporations were treated more equally, and the wealthy ended up paying a higher share of the total income tax revenue. In the end, the bipartisan 1986 Tax Reform Act, according to Bill Bradley, “upheld the general interest over the special interests, showing that clear principles, legislative skill and persistence could change a fundamentally unfair system.”

The current Tax Reform proposal is, of course, only an opening wish list, but it has a long way to go. The current proposal would basically give the richest Americans a huge tax break and increase the federal debt by an estimated $3 trillion to $7 trillion over the next decade. As an example, it would eliminate the Alternative Minimum Tax, which would have saved Donald Trump $31 million in tax on his 2005 income tax return (the only one Americans have seen). Furthermore, there’s lots of work to be done on corporate/business rates, currently proposed to be revised to 15% (from a current top rate of 40%). Workers of all kinds would want to become LLCs and pay 15%.

U.S. Treasury Secretary Steven Mnuchin at the time of presenting the proposal last week stated that the Administration believes the proposal is “revenue-neutral.” The idea is that tax cuts will produce more jobs and economic growth and therefore produce more tax revenue. We’d heard estimates that real GDP, which was .7% on an annual basis in 1Q17 and 2% for the last number of years, would grow to 3-5% under the current tax proposal. However, there is no empirical evidence to show that tax cuts cause growth and, in fact, can result in severe economic problems. The latest disastrous example was the state of Kansas. The huge tax cuts championed by Governor Sam Brownback in 2012 haven’t worked. Kansas has been mired in a perpetual budget crisis since the package was passed, forcing reduced spending in areas such as education and resulting in the downgrading of Kansas’ credit rating.

Furthermore, we’ve got some additional issues that weren’t there for President Reagan and the others in 1986. First, our current federal debt level is 80% of GDP. It was only 25% in 1986. Adding another 25% or 30% of debt, to what we have now, could be a real tipping point for American economic stability going forward. Second, the demographics are so much different. Thirty years ago, the baby boomers were in their 30s and entering their peak consuming and earning years.

Tax Reform is needed and can be done. It’s going to take a lot of work and bipartisan support. It was great to see Congressional leaders reach a bipartisan agreement on Sunday to fund the government through September, without sharp cuts to domestic programs, an increase in funding for medical research, and not a penny for Trump’s border wall. On Monday, Republican Charlie Dent (PA) and Democrat Jim Hines (CT) put together a great op-ed in the Washington Post calling for compromise and cooperation. It concluded: “Ideological purity is a recipe for continued bitterness. …Failure to seek commonality or accept incremental progress will threaten more than our congressional seats and reputations. It puts our systems of government at risk. We owe it to our country to do better.”

Hear! Hear! Yes, let’s make the tax system fairer. Let’s do tax reform correctly- the way they did it in 1986- putting our country’s interests ahead of personal or special interests.