MLK Would Have Loved Finland 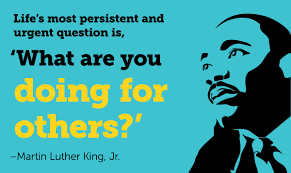 We hope everyone enjoyed the Martin Luther King, Jr. holiday on Monday. We hope you spent at least a few minutes thinking of Dr. King and his legacy. His stirring words and writings remain as relevant today as they were 50 years when he was alive. I am always moved by his comments, particularly on equality, such as:

As I thought about these quotes, it made me think of Finland, recently deemed a “Capitalist Paradise” by the NYT and lauded by the Economist for slashing homelessness while the rest of Europe is “failing.”

As many of you know, my maternal grandmother was Finnish and Elise and I spent a wonderful homecoming in Finland this past summer, meeting relatives and experiencing life first-hand in Finland. Dr. King certainly would have loved a country like Finland that provides a real-life example of a system that works to provide equality and happiness to all.

Finland hasn’t been operating independently all that long. Located between Sweden and Russia, Finland was under Swedish rule from 1250-1809. In 1809 it became a Grand Duchy in the Russian Empire until it declared its independence in 1917. In 1918, Finland experienced the Finnish Civil War; the “whites” were primarily Swedish descendants who were anti-socialists and the “reds” who supported Russian socialism. The whites won and established a republic. World War II saw Finland under attack from Russia and ultimately joining forces with Germany.

After WW II, Finland did not want to become a socialist country. Its capitalists cooperated with government to map out long-term strategies and discussed these plans with unions to get workers on board. Finnish capitalists realized that it would be in their best interests to accept progressive tax hikes. The taxes would help pay for new governmental programs to keep workers and their families healthy, educated and productive. Fast forward to today, the capitalists are still paying higher taxes and outsourcing to the government the responsibility of keeping workers healthy and educated.

The NYT article “A Capitalist Paradise” was authored by a couple who moved from Brooklyn to Helsinki two years ago. Both are US citizens, experienced professionals and enjoyed a privileged life in the States. However, they were both independent consultants with uneven access to health insurance, and major concerns about funding for day-care, and education, including college. What may come as a surprise to some, is that they have experienced since the move an increase in personal freedom.

In Finland, everyone is covered by taxpayer-funded universal health-care that “equals coverage in the U.S. but without piles of confusing paperwork or haggling over huge bills.”  Their child attends a “fabulous, highly professional and ethnically diverse” public day-care that costs about $300 per month. If they stay in Finland, their daughter will attend one of the world’s best K-12 education systems at no cost to them, regardless of the neighborhood they live in. College would also be tuition free.

Many Americans may consider the Finnish system strange, dysfunctional or authoritarian, but Finnish citizens report extraordinarily high levels of life satisfaction. The World Happiness Report announced recently that Finland was the happiest country in the world, for the second year in row, leading Norway, Denmark, Switzerland and Iceland in the poll.

Finland has also become one of the world’s wealthiest countries and, like other Nordic countries, home to many highly successful global companies. A spokesman for JPMorgan Asset Management recently concluded that “The Nordic region is not only ‘just as business friendly as the U.S,’ but also better on key free-market indices, including greater protection of private property, less impact on competition from government controls and more openness to trade and capital flows.” “Furthermore, children in Finland have a much better chance of escaping the economic class of their parents than do children in the U.S.”

Finland’s form of capitalism has worked for businesses and citizens alike. Since Independence, Finland has remained a country and economy committed to free markets, private businesses and capitalism. Its growth has been helped, not hurt, by the nation’s commitment to providing generous and universal public services that support basic human well-being. Finland and the Nordic countries as a whole, including their business elites, have arrived at a simple formula: “Capitalism works better if employees get paid decent wages and are supported by high-quality, democratically accountable public services that enable everyone to live healthy, dignified lives and to enjoy real equality of opportunity for themselves and their children.”

This system works. Over the last 50 years, if you had invested in a portfolio of Nordic equities, you would have earned a higher annual real return than the American stock market according to Credit Suisse research. It’s not a surprise since Nordic companies invest in “long-term stability and human flourishing while maintaining healthy profits.” We made a similar point in our September blog "Reinvent Capitalism?"

Dr. King’s quotes resonate loudly today. We Americans are a country of immigrants- “We came on different ships, but we’re in the same boat now.” In a time of tribal politics- “We must learn to live together as brothers or perish together as fools.” However, since “The time is always right to do what is right,” let’s keep optimistic that “In some not too distant tomorrow the radiant stars of love and brotherhood will shine over our great nation with their scintillating beauty.”