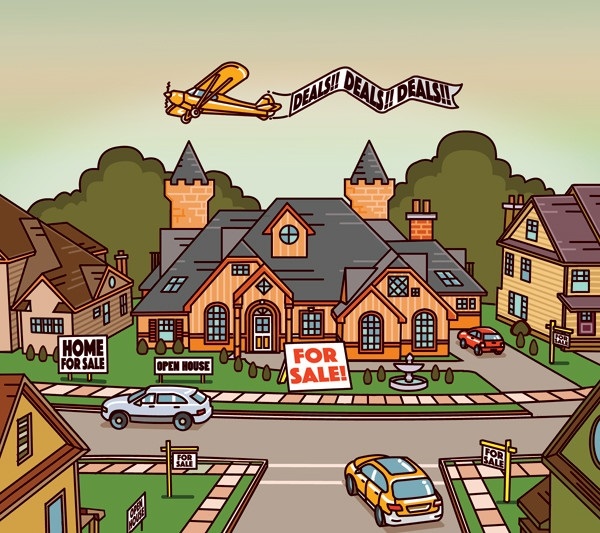 In addition, Americans aren’t any happier with bigger houses. A study by PhD Clement Bellet found that “house satisfaction in the American suburbs has remained steady for the last four decades.” His reasoning is based on the premise that people compare their houses to others in the neighborhood-particularly the biggest ones. The largest homes in the neighborhood seem to be the benchmark. Dr. Bellet tracked the “one-upmanship” by owners of the biggest homes from 1980 to 2009. He found that the size of largest 10% of houses increased 40% more than the size increase of median houses. Apparently, the competition never ends.

Fifty years ago, a one bathroom house or a bedroom that slept 3 siblings might have felt cramped- but it also probably felt normal. Today, many Americans can afford more space and they’ve bought it. They just don’t appear to be any happier with it.

Dr. Robert Shiller, the noted Nobel Prize winner and co-author of the Case-Shiller index of housing prices, was interviewed recently by the WSJ for an article titled “The Biggest Ways People Waste Money”. Dr. Shiller opined that “Big houses are a waste.” He believes that modernization has reduced our space needs. However, he recognizes, that for some, a big house is a symbol of success. Your neighbors may not know about your finances and achievements, but they can see your big house.

Dr. Shiller suggests books such as “The New Small House”- that talk about designing houses to look impressive as well as function on a smaller scale. Living smaller can be easier on the pocketbook, the owner’s time and the environment. He concludes: “Just like Uber and Lyft and Airbnb, using resources more efficiently, we can also build houses that are better at serving people’s needs without being big”.

As a result, we’re seeing that fewer people want to buy large, elaborate dream houses. We know that in the high-end suburbs of Chicago that prices today, in some cases, are ½ of what they were 10-15 years ago. In the Southeast and the Sunbelt, McMansions are sitting on the market, enduring deep price cuts to sell. For example, Kiawah Island currently has 225 houses for sale, which is a 3-4 year supply. Of these, the largest and most expensive are the hardest to sell, especially if they haven’t been renovated recently.

The problem is expected to get worse in the next decade. Baby Boomers currently own 32 million houses, 40% of all the homes in America, and many of these homes are big ones. As the Boomers advance into their 70s and 80s, many will be looking to downsize and/or move to senior housing and therefore will attempt to offload their big house.

When we at DWM talk with clients about housing, we generally ball park a figure of 5-7% of the market value of the house as the annual net cost. The costs include interest, if there is a mortgage, the opportunity costs of not investing the equity in the house, real estate taxes, insurance, and maintenance and repairs. From this total we subtract the expected appreciation. For example, a $500,000 house with a $200,000, 4.5% mortgage, might have $9,000 in interest, $18,000 in opportunity costs, $5,000 in real estate taxes, $3,000 in insurance and $5,000 in repairs. Total costs of $40,000 less 2% appreciation of $10,000 nets $30,000 in annual net costs or 6% of the market value. Of course, values differ across the country and by house. Furthermore, there are some sections of the country experiencing excellent appreciation and some that are experiencing deprecation in value.

As we look at our spending, it’s always good to compare the value received to the cost and, if the cost exceeds the value, a change might be in order. In our example, if the couple owning the $500,000 house feels they are getting $30,000 or more per year of value from the house, that’s great. If they are not, particularly if they have a bigger house that may not be appreciating and may be hard to sell in the future, they may want to think about a change now. Give us a call if you would like to discuss this very important topic.