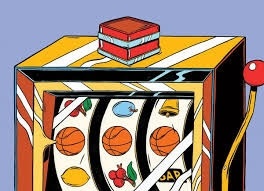 On Monday, the Supreme Court struck down the 1992 federal law that said states couldn’t “sponsor, advertise, promote, license or authorize” sports gambling. The ruling in Murphy vs. NCAA agreed with New Jersey that the law was an intrusion into states’ rights to regulate activity within their borders. NJ had waged a six-year battle against the NCAA, NBA, NFL, MLB and NHL to allow sports betting. NJ will now join Nevada as the two states with legalized gambling. More will certainly follow. Illinois and South Carolina have already introduced bills and are moving towards legalization.

The states, the leagues and lots of others are all licking their chops to participate. The American Gaming Association estimates that $150 billion is wagered every year on illegal bets. Now, sports gambling could become more widespread, more systematic with an even larger market. Mark Cuban, owner of the Dallas Mavericks, believes that the overall value of sports franchises has doubled overnight. “It will increase interest in the arena or stadium, it will increase the viewership for customers online, and help traditional television networks.”

The NBA has discussed with state officials what it calls an “integrity fee” of 1% on all betting. The integrity fee would be needed, in part, to pay for more assistance to league officials to keep the league honest, thus policing players and coaches so that games are not “thrown” to win bets. MLB has proposed a .25% integrity fee. Ted Leonsis, owner of both the Washington Capitals and Wizards, said that the sport franchises need to be paid “equitably” for the content and “intellectual property” they provide to television.

Pennsylvania last year passed legislation to allow sports betting, which included a 36% tax on sports betting revenue. Nevada’s rate is 6.75%. While some states may resist on moral grounds (Utah’s anti-gambling stance is written into its constitution), most will jump on the bandwagon as soon as possible. It has been estimated that $245 billion in legalized sports betting could generate $16 billion in additional state tax income.

Sports data companies, like Sportradar and gambling companies, like MGM and Caesars Entertainment, are hoping to cash in. The betting public can now come out of the “underground” market. Legal bookmakers should do well-Nevada sportsbooks haven’t had a losing month since 2013.

However, there’s only so much money to go around. Last year, Nevada’s sportsbooks had a 5% profit margin, according to the state’s gaming board. A 1% “integrity fee” would represent 20% of the profit. With everyone fighting for their piece of the pie, legalized gambling may not take off as quickly as expected.

Joe Asher, chief executive of William Hill US, part of a major British sports betting operation, cautions that tax rates and league fees could add to the complexities: “It’s not going to be easy to move customers from the black market into the legal market.” Time will tell.