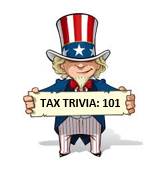 Do you know the history behind the traditional April 15 “Tax Day” deadline?  The due date moves around by a few days, like what happens this year:

Washington D.C.’s Emancipation Day, held on April 16 of each year, happens to fall on a Saturday, making April 15 the observed regional government holiday, thereby pushing this year’s tax deadline to the following Monday on April 18, 2022.

However, do you know the historical timeline of tax assessments and how April 15 came to be selected as the looming day on a taxpayer’s modern calendar?  Let’s take a trip back in time to look at how the tax filing due date for “Tax Day” has evolved…

Besides pyramids, the Nile River and the Sphinx, what is Egypt known for?  It is hard to believe that the origin of taxes can be traced back to ancient Egypt times around 3000 BCE, but there are documented records of taxation being held during a biennial event known as the Following of Horus.  Every two years, the head of state, King Pharaoh, who also held the role of the living incarnation of the god Horus, made his rounds into towns and collected taxes from the people of Egypt.  During this time, Egypt was a cashless society, so seizure of a portion of farmers agriculture produce, property or others merchandise was the means to collect the tax due.  For example, part of a farmer’s crop or cattle herd which could be valued based on the field size or a census would be kept as payment.  Some villagers would even have to offer their time and labor to pay off the tax bill!

Which President bestowed upon us the first ever federal income tax?  On August 5, 1861, it was Abraham Lincoln who signed it under the Revenue Act.  The Act provided needed funds for the Civil War.  Lincoln and Congress agreed to impose a 3% tax on annual incomes over $800.  The tax payment due date was June 30.  However, the income tax provision was quickly replaced by the Revenue Act of 1862, which established the office of the Commissioner of Internal Revenue, the department in charge of the collection of taxes.  This would eventually become the modern Internal Revenue Service (IRS).   A recommendation letter dated on July 3, 1862 from Salmon Chase, who was the Secretary of the Treasury at the time, to Abraham Lincoln suggested the first appointment of Commissioner to be George Boutwell, who was the former Governor of Massachusetts.

Fun fact:  Can you guess where else one would have seen the presence of Salmon Chase?  His portrait was featured on the highest denomination U.S. currency ever to publicly circulate – the $10,000 bill!

According to the Investopedia website, the Revenue Act of 1862 provided for the first U.S. progressive tax to be created and imposed tax of 3% on incomes between $600 and $10,000 and a 5% tax on incomes over $10,000.  The income tax rates were later increased with the subsequent Revenue Act of 1864 that created more income tax brackets and higher tax rates.  In 1872, Congress allowed the law to expire, however, import tariffs and property tax assessments continued to provide revenue for the government.  The Wilson-Gorman Tariff Act of 1894, which imposed a direct flat tax of 2% on earnings in excess of $4,000, would follow.

Which Constitutional Amendment was enacted on July 2, 1909?  The 16th Amendment was passed by Congress.  It was passed in response to the 1895 Supreme Court case Pollock v. Farmers’Loan & Trust which ultimately invalidated the Wilson-Gorman Tariff Act.

What happened on February 3, 1913?  Congress ratified the 16th Amendment, stating that “Congress shall have the power to lay and collect taxes on incomes, from whatever source derived, without apportionment among the several states and without regard to any census or enumeration.”  Later in the year, in October, the federal income tax system that is used today was created, consisting of 7 brackets with rates ranging from 1% on the first $20,000 of income to 6% on income exceeding $500,000.  March 1 was chosen at random as the tax deadline.  It is suspected that the date was simply selected to give people a couple of months to gather paperwork and crunch numbers after the end of the year.

On March 12, 1918, the personal income tax filing due date changed to March 15, which wasn’t related to the governments need, rather it was to give panicky taxpayers even more time to gather documents.  Today, many partnership and S-corporations still use this tax filing deadline.

What year did “Tax Day” officially become April 15?  The answer is 1955!  Newsweek magazine stated that the switch from March 15 to April 15 was to give taxpayers another month to recover from holiday expenses and to accommodate for more complex tax filings.  This time, however, the IRS would acknowledge that the extra month of time would also benefit them with spreading the employees’ heavy workloads across another 30 days.

One final piece of trivia…we won’t have another April 15 due date again until 2024.  Thank you for the extra days of preparation, Uncle Sam!

If you like reading about taxes, consider using the search tool to look for other blogs written by the DWM team that can be found under the blog tab on our website. Be sure to keep watch for all those final tax documents and if you have any financial tax matters that we can help you with, let us know!