The 2020 Election and the Markets-You Need to Vote! 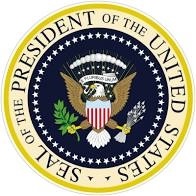 Who’s going to win?  What will that do to the markets? In the long-run, the markets have shown it doesn’t make a difference to them.  If you line up all two dozen presidential terms of our presidents from 1933 to 2019 in two camps, Republicans and Democrats, the average annualized return during Republican and Democratic presidencies is almost identical: 10% per year.  Please see the chart below with Republicans in red and Democrats in blue. Furthermore, since 1933 there are only three presidential terms where the results have been negative. 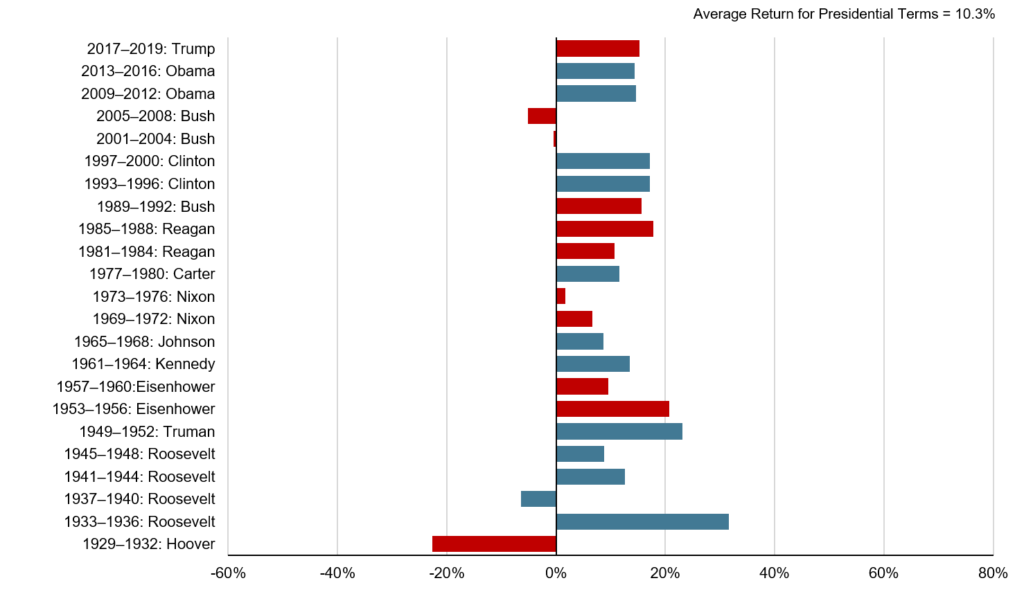 We don’t know who will win but here are some general apolitical thoughts.

Re-elections are typically referendums on the incumbent and the economy is a big part of that.  A strong economy for an incumbent typically guarantees re-election. However, a poor economy generally spells defeat for an incumbent.  In 1980, Ronald Reagan famously finished off Jimmy Carter in the debates by asking the American people a simple question “Are you better off today than you were four years ago?”  Voters weren’t better off and voted Carter out.  Currently polls show Trump and Biden about even on the polling question of who would handle the economy better.

Third party candidates should have a lesser impact in 2020 than 2016.  Third party candidates were 4% of the vote in FL in 2016, 4% in Pennsylvania and 6% in Wisconsin.  President Trump won all three states, by 1.2% in FL and lesser margins in PA and WI.  There is no significant third-party vote expected in any of the highly contested states in 2020.  In addition, a protest vote from Bernie Sanders supporters seems less likely in 2020.  About 10% of Bernie Sanders voted for Donald Trump in 2016.

Based on polls, there seem to be fewer undecided voters at this time than in 2016.  Four years ago, in mid-October, there were 10% or more of the expected voters that were undecided.  Now, that number appears to be less than 5%.

The market likes tax cuts, government stimulus and certainty.  The market loved the Republican led Tax Cuts and Jobs Act in December 2017 that cut taxes substantially starting in 2018.  Joe Biden has said that, if elected, he would push for an increase in taxes for corporations and those making over $400,000.  In addition, Biden has indicated his visions for major government stimulus programs for COVID-19 relief, infrastructure and climate change.  Trillions of dollars of stimulus money is generally good for markets short-term but tax increases can be bad for the markets long-term.

Long-term tax cuts generally help growth stocks, since much of their lifetime earnings may be many years in the future.  Government stimulus can have a bigger impact on value stocks that often benefit from short-term support.

WSJ’s James Mackintosh indicated last week that markets in the last couple of months may have reflected these impacts. On days where a new COVID economic stimulus appeared likely, the markets went up, when relief looks unlikely the markets went down.  At the same time, the markets watch the polls and companies, like Real Clear Politics, provide daily odds on who is expected to win. In August and early September, Joe Biden’s chances for election sagged- indicating that tax increases might not happen.  Big Tech roared during that period.  After that, Mr. Biden’s chances rose again and Big Tech struggled.  Mr. Biden’s “odds of victory” increased after the first Presidential debate from 55% to 65%.  And, during that time, growth stocks struggled. Although polls show Biden ahead, the same was true of Clinton in 2016.  Polls are far from 100% accuracy in prediction.

President Trump’s COVID-19 diagnosis in early October initially dragged down the entire market as it added to the uncertainty.  Then, when traders bet that the poor job numbers made stimulus more likely, there was a sharp recovery that did not include Big Tech.  We’ve seen a recent rotation to small cap and international stocks from large cap stocks based not only on the betting polls but also the “regression to the mean.”

Now it is time for you to vote.   One of the most basic democratic rights we Americans have is the right (and responsibility) to vote.  We respect everyone’s right to vote for the candidates they want to see elected.   Early voting has started in most states.  We encourage you to vote!!