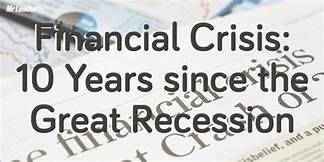 On September 15, 2008, Lehman Brothers imploded; filing a $691 billion bankruptcy that sent stock markets into a deep dive of 40% or more. The global financial crisis ultimately would destroy trillions of dollars in wealth- $70,000 for every single American. The deep financial trough produced the Great Recession.

Now, 10 years later, how are we doing and what lessons have we learned?

How are we doing?

Official economic statistics would say that the American economy is fully recovered. We are in a 9+ year bull market with a cumulative total return of 350%. The total combined output of the American economy, known as our gross domestic product (“G.D.P.”) has risen 20% since the Lehman crisis. The unemployment rate is lower than it was before the financial crisis. These key measurements, now a century old tradition, however, don’t tell the whole story. The official numbers are accurate, but not that meaningful.

For many Americans, the financial crisis of 2008-2009 isn’t over. It left millions of people-who were already just “getting by”- even more anxious and angry about their future. The issue is inequality. A small, affluent segment of the population receives the bulk of the economy’s harvest. It was true 10 years ago and is even more so today. So, while major statistics look good, they really don’t measure our country’s “human well-being.”

The stock market is now 60% higher than when the crisis began in 2007. While the top 10% of Americans own 84% of the stocks, the other 90% are much more dependent on their homes for their overall net worth. The net worth of the median (not the “average”) household is still 20% lower than it was in 2007, despite the record highs for the stock markets.

The unemployment rate, currently at 3.9%, does not take into account two major items. First, the number of idle working-age adults has swelled. Many of them would like to work, but they can’t find a decent job and have given up looking. Currently, 15% of men aged 25-54 are not working and not even looking; therefore, they are not considered “unemployed.” Second, many Americans are working at or near the federal minimum hourly wage- which has been $7.25 per hour since July 2009. Neither group is benefitting from low, low unemployment rates.

There is a movement to change these metrics to something more meaningful.  A team of economists, Messrs. Zucman, Saez and Piketty, have begun publishing a version of G.D.P. that separates out the share of national income flowing to rich, middle class and poor. At the same time, the Labor Department could modify the monthly jobs report to give more attention to other unemployment numbers. The Federal Reserve could publish quarterly estimates of household wealth by economic class. Such reports could change the way the country communicates about the economy. Economist and Nobel Laureate Simon Kuznets, who oversaw the first G.D.P. calculation in 1873, cautioned people not to confuse G.D.P. with “economic welfare.”

What lessons have we learned?

Mohammed A. El-Erian, the chief economic adviser at Allianz, the corporate parent of PIMCO, recently summarized, in the “Investment News,” some key lessons learned from the crisis.

Yes, we’ve made some good progress in the last 10 years since the financial crisis. But, there’s still plenty of room for improvement.