The Stock Market is Not the Economy 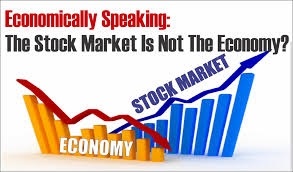 The connection between the markets and the economy was likely forged by the Great Depression. First, the markets plunged a huge 68% in 1929 and then the economy hit bottom for almost everyone. Even in the 1950s and 60s, it was easier to connect the markets with the economy because the enormous payrolls of the largest companies fueled the expansion of the middle class.

In 1962, the two largest public companies, GM and AT&T employed 1.2 million people. Today Microsoft and Apple together employ 280,000. In 2015, about 600,000 U.S. companies had 20 or more employees. However, only 1% of those were publicly traded. The S&P 500 consists of the largest 500 publicly traded companies. Their financial strength makes them more likely to survive a downturn and prosper, even in very tough times.

While more than 50% Americans have investments, many of those have a minimal amount. The Fed reports that 84% of all household stock ownership is controlled by 10% of American households, with 1% of the households owning 40%. Stock ownership is heavily skewed to the richest parts of the population, who are less likely to feel the pain of an economic downturn.

Today, the gap between Wall Street and Main Street has never seemed larger. The United States is possibly on the brink of the worst economic collapse since the Great Depression. 13% (20 million) of American workers are unemployed, higher than anytime during the 2008-2009 financial crisis. 109,000 Americans have died from the coronavirus with hundreds dying each day and no turnaround in sight. Towns and cities across the country have been witnessing two weeks of protests against police killings of African-Americans.

Yet, stocks keep climbing. The S&P 500 dropped 34% from February 19th until it hit bottom on March 23rd. Since then, in just a little more than two months, the S&P 500 index has soared-turning positive for the year on Monday. The period from March 24 to June 3 represents the best 50 trading days since 1952. The NASDAQ 100 index (made up of technology and healthcare companies) hit its all-time high on June 4.

Actually, though, the rising “tide hasn’t lifted all boats.” The five largest listed companies- Microsoft, Apple, Amazon, Alphabet and Facebook are up over 10% this year. Yet, the other 495 companies in the S&P 500 are down about 10%. A few key sectors such as technology, healthcare, communication and consumer staples have done exceptionally well. Small-caps are down 7% year-to-date and international markets are down over 8% ytd. The biggest US/multinational stocks are the ones that have not only recovered, but are positive; whereas pretty much everything else is still negative.

In the first five months of this year big “growth” stocks grew 6% while small, low priced “value” stocks lost 25%. This was the biggest gap between growth and value stocks in over 20 years. The 50 most expensive stocks in the S&P 500 as of the first of the year have gone up an average of 11% in 2020. At the same time, the 50 cheapest stocks were down an average of 17%. However in recent days, small and value stocks have begun to show signs of recovery. For example, the value of American Airlines shares have nearly doubled in value in the last week once AA announced it would restore more flights to its schedule.

Wall Street is all about expected future earnings. In the five weeks nose-dive from February 19 to March 23, the markets incorporated the expected impact of the coronavirus on future profits. What turned the markets around was the Fed’s declaration in late March that it would do whatever it needed to do to stabilize financial markets. And, they’ve followed through with emergency loan programs and securities purchases. At this point, investors are unwilling to bet heavily against a rising market when the Fed is bolstering it.

The consensus economic forecast for 2Q20, according to Bloomberg, calls for GDP to decline 30% and then gain 15% in 3Q20. If that prediction is close to reality, the economy will be in bad shape overall in the fall, but the recession will be over. The market is always forward-looking. It is expecting good things ahead. And current pricing, including huge valuations on the largest companies, is being “justified” by the prospect of increased corporate profits in the future and the current rock-bottom interest rates.

Of course, the facts are not all positive. Tens of millions of Americans are still out of work and some stock prices are already quite steep based on standard metrics, like price to earnings ratios. Trade with China is certainly an area that can flare up. If there are further waves of COVID-19 infections and deaths or severe secondary economic damage from the current slowdown or any number of other problems, it could lead to a major decline in prices and the possibility that the recovery might not be shaped as a “V” but rather as a “W”. Either way, prudent investors will stay invested in their long-term, risk appropriate, diversified asset allocation.