TRADITIONAL VS ROTH 401(K): WHERE SHOULD I BE PUTTING MY MONEY? 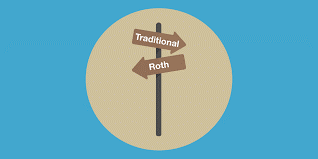 Recently, we have had quite a few conversations reviewing the age-old debate of whether Roth 401(k)s or Traditional 401(k)s are better. Well perhaps not age-old considering Roth 401(k)s came out in 2006, but still a common question with no quick answer. To start, let’s clarify exactly what a 401(k) is and how a Roth 401(k) compares and contrasts to a Traditional version.

Starting in 1980, the first 401(k) program was established through Johnson Companies. This retirement program provides employees the ability to shift their income straight from payroll into an investment account just for them. In a Traditional 401(k) plan, this shift comes in the form of deferred payment. Previously being reliant on company-set pension schedules, 401(k) plans transfers the legwork and adoptability of retirement savings away from company management and into the hands of workers themselves. Through this vehicle, employees can take a portion of their pay on a regular schedule that would normally be included in their check and instead deposit it into a corporate-structured, employee-managed investment account. These plans quickly became a company favorite, with over 50% of current companies either already providing these plans or considering it today.

Additionally, 401(k)s provide employees with an additional benefit: Tax-deferral for contributions. While contribution amounts to this account are capped annually ($19,500 for 2020 without catch-up), all amounts transferred are considered tax-deferred, i.e., employees can directly reduce their taxable income in the year contributed by their total contribution amount for that year. For example, if you were paid $100,000 in 2020 and deferred $19,000 into your 401(k), your total taxable income for 2020 would be $81,000.

For years, Traditional 401(k)s (and by proxy extremely similar accounts such as 403bs or 457s), dominated the market of employer retirement plans as they were one of the only real players in the game. However, in 2006, Roth 401(k)s (which are modeled after Roth IRAs created in 1997) shook all of that up. Why? Because these Roth plans offer up no current year tax deduction, but once contributed, the principal is never taxed again and the earnings are never taxed. Not to mention that since the contributions are already taxed, if rolled into a Roth IRA upon retirement, there are no required minimum distributions (“RMD”s) during the account owners lifetime, and beneficiaries are not taxed as well which provides some extra incentive for individuals who look to provide significant inheritances to their loved ones.

The addition of this designation to retirement plans opened up a lot of questions that we’ve seen over the past few years as more and more employers begin to offer the option. The most prevalent one being the titular “How much should I be investing in my Roth 401(k) vs my Traditional 401(k)?”. And the answer may not be as simple as it seems at first glance.

The taxability of the contributions to each is the driving factor behind deciding which form of retirement plan works the best for each client. The long term understanding of tax rates can help clear up this picture. Take the situation below for example: 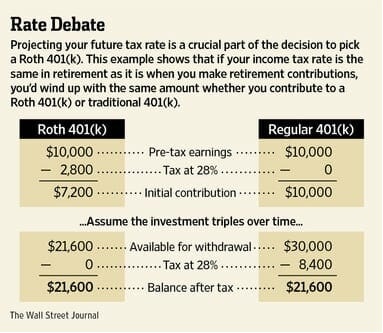 As stated in the blurb above the figures given in Chart 1, the calculations hinge based on tax rates over time. In theory, both accounts end up holding the same net value. However, the idea that tax rates over time will remain the same is highly unlikely. The 2017 Tax Act cut rates initially but they gradually ascend back to the former, higher rates. Further, with trillions of dollars of U.S. debt hanging over our heads, tax rates look to go up in the coming years. The result of this expected increase in tax rate indicates that the tax on the Traditional (also known as “regular”) 401(k) column shown in Chart 1 should be bumped up to something like 32% or higher, resulting in 4% less overall value of Traditional 401(k) assets than that of the Roth 401(k). While that may be only $1,200 dollars less in the example above, the larger the 401(k) value at retirement age the more significant this difference will be. Then again, this example assumes you stay at the same income now and in the future which may not be realistic. For many retirement will likely drop them into a lower tax bracket. As such, the Traditional 401(k) may make more sense. For a fun analysis to play around with this idea, try using this calculator.

One additional consideration not shown in the above chart is that additional taxable income in retirement years can also cause Traditional 401(k)s to have less appeal than Roth 401(k)s. If you expect to get a sizeable pension, annuity payout, or other income stream during retirement, the tax-deferral of the Traditional 401(k) contributions works less in your favor as you’ll likely be taxed at a similar or (in rare circumstances) higher rate than that of when you were working.

Further, the younger an individual is, the more likely that they will be in a lower tax bracket than when they look to retire. For this reason, we generally hope to see young individuals contributing at least 50% of their 401(k) contributions towards their Roth 401(k).

At the end of the day, there are many variables to consider when choosing between a Traditional or Roth 401(k). One needs to make assumptions about one’s current and future financial situation. Frankly, those can be tough assumptions to make, but fortunately the argument over Roth vs Traditional is not an exclusive debate! In actuality, a significant number of workers will find that a mix of these savings, for example 50% of 401(k) contributions being allocated to Traditional and 50% to a Roth 401(k) can work out to receive the benefits of both sides, slightly lower taxes now as well as slightly lower taxes in the future!

Here at DWM we work with our clients to ensure that proper analysis through financial planning and tax planning provides us insight into the benefits that each type of 401(k) plan can offer on a case-by-case basis. If you would like to review this information and how it may apply to you in more detail, please feel free to reach out!