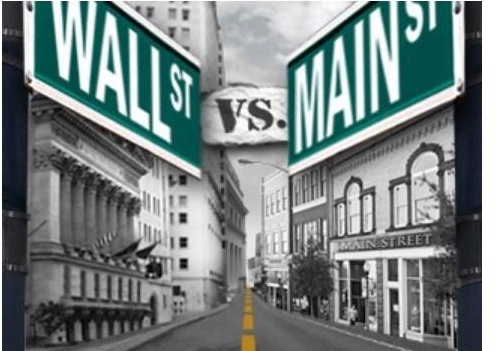 A year ago at this time, the economy (“Main Street”) was in a tail spin brought on by Covid. Hopes of a quick recovery from it were fading away as scientists and many of us realized that this pandemic would continue on for a significant time causing death and other negative health and societal issues.

But at the same time a year ago, the stock market (“Wall Street”) was surging after bottoming out in late March 2020.  It was hard for many to comprehend the huge disconnect between Wall Street and Main Street, but frankly this is not an unusual phenomenon.

The stock market is typically forward-looking. Once the initial Covid-related news was digested and plans of action around the world were put in place, traders quickly shook off the near-term negatives and focused on what’s next. It’s the reason the market as represented by the S&P500 last year was able to not only make up its at one time 30%+ loss, but actually achieve an outsized return of 18% for the 2020 calendar year. Fast forward to now, and the market, as represented by the S&P500, is up another 10%! Pretty amazing.

People are feeling really good right now: Stock prices are high. Wallets are thick with stimulus money. CDC is relaxing guidelines. Trips are being planned. Goods are being purchased. The economy most likely will go on a tear like we haven’t seen in decades.

So is now the time to double-up on stocks? Not necessarily. Because the same forward-looking forces that drove the stock market up a year ago, could bring it down in 2021. Those same traders that could look past the stay-at-home economy are now the ones looking past peak growth figures that could hit later this year. Sure, maybe we’ll see 8% GDP at some point, but an economy this big can’t keep running at that pace and will eventually come back down to its traditional 2 “handle”.

Unfortunately, those days when many were so optimistic about corporate earnings, economic growth, and the willingness to speculate on everything could be over now or over soon. In other words, while Main Street is right now escalating higher, Wall Street worries how it will succumb to gravity in 2022 and/or beyond. As we’ve said many times before, “Wall Street isn’t Main Street.”

The WSJ just yesterday reported that “The Fed has begun to signal an eventual shift away from easy-money pandemic policies, as evidence builds of a robust recovery and higher inflation.” Fyi, the stock market loves easy money and hates inflation, so this is yet another sign that things could be shifting.

Further, in what may be the biggest tell of a big investor environment shift, can be seen from those “risk-on” speculative areas that have had some of the biggest headlines in the last several months, SPACs and cryptocurrencies. Most SPACs are down big this year including the Defiance Next Gen SPAC Derived ETF which has fallen about 30% in the last three months. And then there’s Bitcoin, the most popular crypto, dropping double-digits percent just yesterday and now down over 30% since its mid-April peak!

This isn’t to say that all stocks will be falling into a bear market any time soon and that carnage is right around the corner. But it is to say that there is a lot of evidence that the Reddit message board days of “To The Moon” and stocks having outlandish valuations moving higher could be behind us. The last bull market was so long that many, particularly those inexperienced traders that started during the wild Covid-inspired market last year, may have forgotten or never experienced what generally makes sense in the early part of a market cycle: VALUATION! Non-sexy value may outperform growth. And we may even see international outperforming domestic.

Diversification is always your friend, but now more than ever, may really make sense. Recall the chart below: you don’t want to be that person that bought at the highs on elation and sold at the lows on fear.   So don’t get greedy, stick to your long-term target Asset Allocation mix, and don’t fret if Wall Street isn’t acting like Main Street. The cycle could change quickly once again… 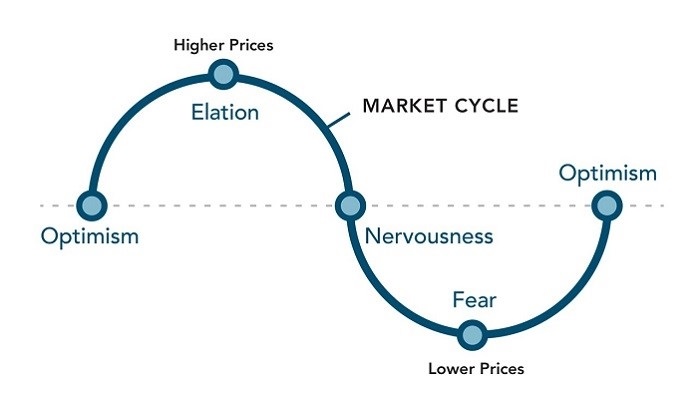