Warning: When Investing, Keep Your Emotions in Check

When I took Economics 101 back in the “Dark Ages,” established theory was that individuals make rational decisions with their money.  Well, we know now that that was over-simplified and often wrong.  The fact is that the investment process is filled with psychological pitfalls. Noted behavioral economists such as Daniel Kahneman and Dan Ariely, which have been featured in earlier DWM blogs, have spent a lifetime identifying the many ways in which we human beings are prone to cognitive illusions and how such mistakes affect our lives and our money.  The WSJ’s Jason Zweig puts it this way: “When you win, lose or risk money, you stir up some of the most profound emotions a human being can ever feel.”

After a mostly great three year run up, the markets have been down in 2022. Market cycles go up and down, but over the long-run markets have been up, in fact about 10% per year for the last 100 years. At the same time, there are cycles of investor emotions.

Let’s first focus on what happens as the markets decline.  The elation from the past disappears and some investors start to get nervous.  As the markets continue downward, anxiety, fear and panic all set in.  Lots of emotions biases are working on you.

The result, as the loss continues, the undisciplined, emotion investor sells at a “low” value, oftentimes just weeks or months before the markets start to recover and start the next upward cycle.

The reverse happens during the upswing. The emotionally impacted investor waits to get in until the markets are “fully recovered” and sits with little or no equity exposure. Then, as the markets go higher, this investor becomes confident, excited and euphoric as they invest in the markets in a major way.  This is an example of both the recency bias and the “overconfidence bias” in which you have more confidence than you should, given the facts.  It’s also an example of the “FOMO bias” (Fear of missing out bias) as the markets steam to new highs.

Remember too that news and social media love to get your attention, often using fear.  Fear sells and adds more readers, subscribers and followers. Also, in down markets, they help push the emotional investor to new depths of despair in a down market.

The result for the emotional investor is two-fold.  They tend to buy high and sell low. Further, they inflict a substantial amounts of stress on themselves during the process.

Keep your emotions in check.  Investors who have followed their emotions, joining the crowd of other emotional investors, have, in the long run, regretted it.  The average investor gets the timing wrong.  During the last thirty years, which included three crashes (the 2000 dot.com bubble bust, the 2008 Financial Crisis and the 2020 COVID scare), the S&P 500 index has gained on average 11% per year.  According to Morningstar, investors who “Followed the herd” (selling when others were selling and buying when others were buying) had a return of ½ of that: 5.5% per year.  Those non-emotional buyers who bought when others were selling and sold when others were buying were up 15% over that time period.  Investing with emotions can be very costly!

Here are our recommendations:

In closing, when investing, don’t let your emotions (represented by your heart) make your rational brain look like an idiot: 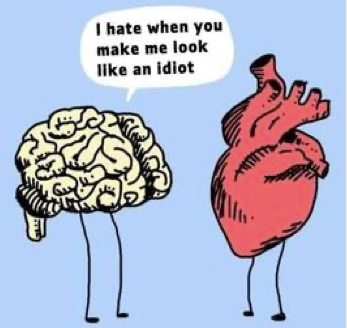 Detterbeck Wealth Management is a fee-only financial planning / wealth management company with offices located in Palatine, IL (Chicago area) and Charleston, SC areas serving clients locally and across the country. To contact us about setting up an appointment, please see our contact us page
https://dwmgmt.com/﻿