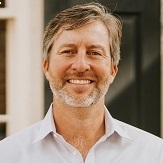 “I love crafting and managing well-diversified portfolios. Even though this kind of investing may be construed as slow and/or boring; it is superior to speculating which I see as a glorified form of gambling. Enough about the latest fad and trying to hit the home run. Let’s focus on the things we can control. There’s so much noise out there and most of it is garbage. I love filtering out that noise for people and helping them win a slow and steady race. Helping them make their money work harder by eliminating the unforeseen landmines hiding within the financial plans and portfolios. That’s fun to me.”

After a sunshine-filled college experience at UC-Santa Barbara, Brett returned to his Chicagoland roots and started his financial career at the Chicago Stock Exchange. Soon thereafter, he went to work for the Chicago Corporation, before founding Detterbeck Wealth Management with his father and partner Les in 2000. Outside of the office, his two boys’ schedules keep him and his wife, Aimee, very busy. Somehow he still finds time to tear it up in his fantasy football leagues. He’s also passionate about exercise and craft brewing.